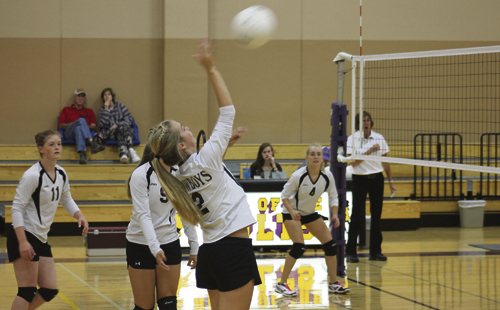 Meeker’s high school varsity traveled to DeBeque last Friday and defeated the lady Dragons in three straight games. The lady Cowboys are currently 5-1 and will host Caprock Academy this Friday, then play in Vail Saturday. “The whole team is working hard to improve and they are all striving to better themselves and the team, every chance they get,” Meeker head coach Janae Stanworth said. Meeker easily defeated the Dragons; 25-14 in the first game and won by the same margin, 25-11 in the second and third games. “We had 92 percent serving and the girls really stepped up their defense and serve receive,” Coach Stanworth said. Meeker sophomore Krissie Luce led the team with 22 serves, including six aces, while her twin sister Kassie and Lila Klinglesmith each had 14 and both had two aces. Seniors Peyton Burke and Maggie Phelan each had nine serves and classmate Kinzy Burke had four. Kassie Luce led the team with 18 digs, while her twin and Peyton Burke each had 10 and Kinzy Burke had eight. Senior Reese Pertile led the team with nine kills, senior classmate Halle Ahrens had eight, Krissie Luce finished with six and sophomore Michaela Jones had five. The JV match against Caprock Academy will start at 5 p.m., followed by the varsity. Meeker will play Vail Mountain, Saturday starting at 1:30 p.m.