MEEKER | The ERBM Recreation & Park District Winter Blast event on Saturday, Jan. 14, found more than 150 people at Paintbrush Park for the Cardboard Derby and Winter Carnival. The snow was perfect for the derby with 66 individuals and 11 families testing their cardboard creation. 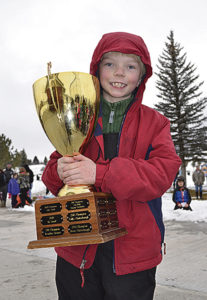 Mathias Cale came away with the grand champion traveling trophy with a time of 9.97 seconds.
The fastest time for each age division was: 2 and under—Dustin Ward, 24:22; 3-4 year olds—Heather Dunton, 14:90; 5-6 year olds—Raegan Clatterbaugh, 12:78; 7-8 year olds—Sam Conrado, 14:03; 9-10 year olds—Mathias Cale, 9:97; 11-12 year olds—Brendan Clatterbaugh, 13:34; 13-18 year olds—Colby Clatterbaugh, 11:75; 19 and up—Kendra Ward, 11:37; family team—Miesners, 11:06.
Most creative creation went to the Grimes family with their Viking ship (complete with oars and a cardboard horned helmet). The Theos family was second and Conrado family was third.
Biggest wipeout winners for each division were Daniel Hall, Dessa Hadden, Col Williams, Alaric Odell, Mason Allen and Bow Muxlow, Liam Deming, Cooper Main, Kendra Ward and the Theos family.
The Winter Blast event concluded with fire dancing, snow games and the new Ninja Warrior competition. In this competition, participants raced through a defined course in the playground equipment at Paintbrush Park. Kayden Aldridge placed first in the five and under division. In the five and over division Natosha Clatterbaugh was first, Colby Clatterbaugh second and Rhiwan Williams was third.
More pictures of the event are available at www.theheraldtimes.com

Listen to this post MEEKER | Voice your opinion by completing the ERBM Recreation and Park District survey which was recently placed in mailboxes.

Listen to this post MEEKER | Join Blair Seymour, the development program director and cycling program director for Steamboat Springs Winter Sports Club, as she shares her passion for teaching and educating all ages in […]

Listen to this post MEEKER | Throughout the past few years, we at ERBM have received some common questions pertaining to our finances.  These questions have been reviewed with our Board and a financial memo […]