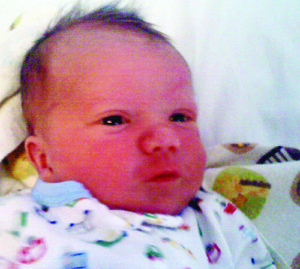 Aspen Steele would like to announce the arrival of her baby brother, Marshall Alan Henson. Marshall arrived Tuesday, April 12, 2011, at 1:05 p.m., weighing 6 pounds, 9.3 ounces. He was 19.25 inches long.
Aspen and Marshall’s mommy is Stephanie Henson of Rangely, Colo. Grandparents are Nita Henson and Dave Bowlds of Rangely, and the late Stephen Henson Sr. of Rangely. Great-grandparents are Viola Henson of Brush, Colo., and Jerry and JoAnne Lewis of Westside, Iowa. Great great-grandmother is Doris Lewis of Westside, Iowa.

RANGELY I Rangely was recently awarded an Energy Conservation Grant from the Department of Local Affairs (DOLA) in the amount of $402,000 for the improvement in R-factor and repair of leaks at Town Hall.

Letter: Thanks extended to ladies of shelter

We would like to thank Cindy, Fern, Heidi and Vikki for all of your help with our problems while adopting our new cat. Rangely is fortunate to have such caring ladies at the Rangely Animal […]

RANGELY I What a difference a day makes. The Lady Panthers played perhaps their best match of the season last Friday against Vail Mountain. The next day, against Plateau Valley, they didn’t play nearly as […]