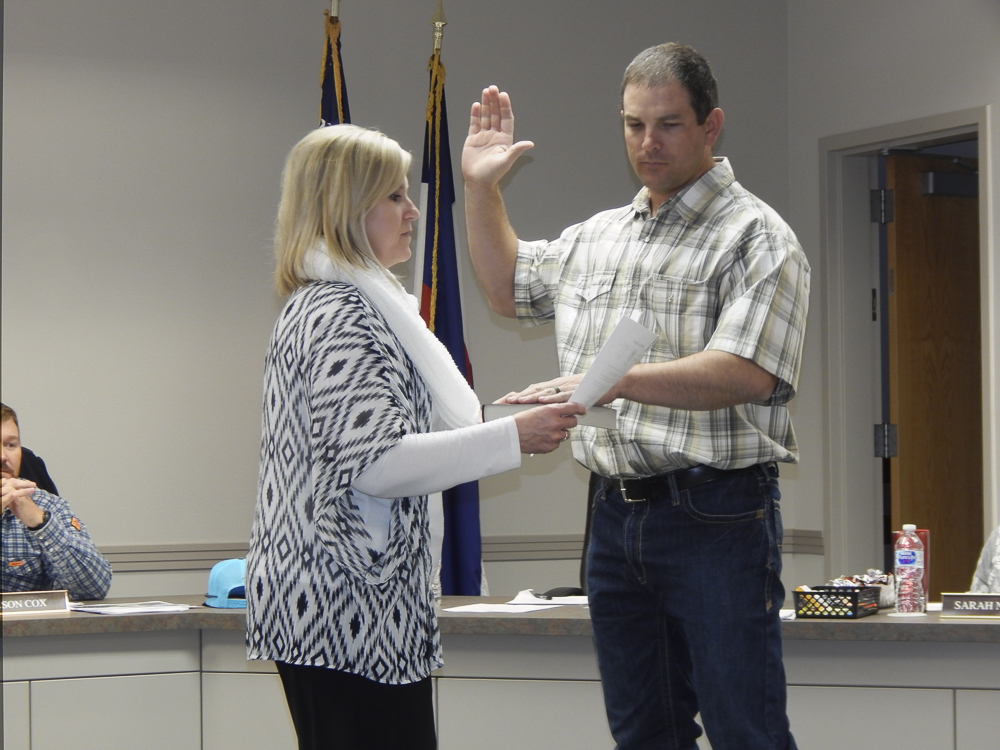 RANGELY | The Rangely School District Board of Education meeting was called to order by Sam Tolley on Monday, Dec. 9. Present were Tolley, Jason Cox, Todd Low, and Sarah Nielsen.  Sarah Nielsen and Todd Low were sworn in.  Superintendent Matt Scoggins explained that the district had just received certified election results which caused a delay with the swearing-in of the newly elected school board members.

Scoggins reported that $2,400 was donated by the Rangely Area Chamber of Commerce from their Santa’s Gift Shop Bazaar and all the proceeds went to pay down the school lunch account debt.  He recognized Michelle Wilkie for her direction of the production of “Annie the Musical” at the Rangely Jr./Sr. High School and Principal Mergelman’s acting debut in the production. Student absences have become an issue within the school district, Scoggins said, and they will be using the court system in hopes of improving school attendance.  A letter will be sent in January to parents on the specifics.

The district received unexpected revenue with the increased assessed valuation, prompting Scoggins to ask the board to use $25,000 out of the budget for a small Christmas bonus.  Cox moved to approve the requested amount for bonuses and Low seconded the motion.  The bonus will be a set amount given to all full and part-time permanent school district employees before Christmas break.

Scoggins spoke about the proposed mill levy stabilization bill which would raise the district’s mill levy 16 or 17 mills if it passes. Scoggins described it as “robbing Peter to pay Paul.” The bill will be a $3.7 million increase in taxes to be redistributed throughout the state.  Scoggins is concerned about the impact to taxpayers such as Chevron, who absorb much of the tax burden, saying, “It could drive businesses away from Rangely.”

During new business, Scoggins addressed buying new camera security systems for the schools. The systems are far more affordable now than they were the last time the district reviewed prices. Scoggins showed photos of recent vandalism of district property and said high-resolution security cameras could have helped if they were in place at the time the vandalism occurred. Currently, 73% of all elementary schools and 94% of high schools are employing security cameras.  Cox moved to approve up to $100,000 for a new camera security system and Low seconded it. The motion passed unanimously. That amount will cover less than half of the amount of the two complete bids that Scoggins presented to the board.  The district will apply for grant funding to offset the cost. The flashing school zone sign that is no longer functional on River Road will be replaced in the next couple of months with two electronic radar speed-reading signs on the same road leading to Parkview Elementary School.

After some discussion about the promised burden to the taxpayers decreasing Nielsen moved to certify the following mill levies for the property tax year 2019 based on 7.958 total mills, the motion was seconded by Cox and passed unanimously.

A resolution to declare a vacancy was passed. In accordance with state law, Rangely School District Board of Education declares a vacancy in this school director office that will be filled by appointment by the board within 60 days in accordance with the following procedure: interested persons are invited to send a letter to the board with a statement of interest and qualifications by Dec. 17.  The board will interview prospective candidates and appoint a candidate on Tuesday, Jan. 7, 2020, at a special board meeting.  To be eligible for appointment, a candidate must be a registered elector of the school district and a resident of the director district in which a vacancy exists. The appointee will serve until the next regular school biennial election in November 2021 (at which time an election will be held for a successor to fill the remainder of the unexpired term.)

The next BOCES meeting is Monday, Dec. 16 and the next regularly scheduled Board of Education meeting will be held on Tuesday, Jan. 21 at 6:15 p.m.

RANGELY — Not only is the Rangely School District looking for ways to save money, it is re-evaluating how it spends money.

RANGELY | The Rangely School Board met Tuesday night to listen to quick updates from district staff and discuss the upcoming mill levy override election. The current mill levy partnership between the school and recreation […]