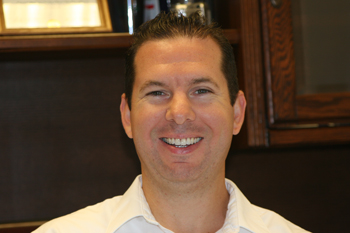 MEEKER I Gabe Smither grew up in a small town in Missouri and most recently lived with his family in Kansas City, on the Kansas side.
But, a couple of times a year, they would make a trip to Colorado for vacation. They always thought it would be nice to live here someday.
Now they call northwest Colorado home.
Smither is the new vice president of lending at Mountain Valley Bank, filling a position vacated by Tawny Halandras when she moved up to president Aug. 1 to replace Bruce Clatterbaugh, who is retiring.
“My wife and I have always loved Colorado,” Smither said. “We generally come out twice a year anyway to somewhere in Colorado, and at some point we wanted to live out here. We thought 20 years later, but fortunately this is the way it worked out.”
Halandras is glad with the way things worked out, too.
“We are pleased to have Gabe join us,” she said. “We believe he will be a strong commercial lender for our bank and serve our customer base well. He and his family are sure to be a great addition to our community.”
Smither had been doing commercial lending at Union Bank and Trust in Kansas City, Kan., before taking the job at MVB. He has 12 years of banking experience.
“I can’t remember where I saw the ad, but on a whim I shot my resume out,” he said. “I wasn’t thinking I would get any response, and luckily we did.”
Smither grew up in Weston, Mo., which had a population of less than 1,500 back then, he said. His wife, Tracy, also grew up in the same town.
“So this isn’t that big of an adjustment,” he said of the move to Meeker. “But we had never been to northwest Colorado. The first time was when we ventured out here for an interview.”
Smither and his wife have two children: a son, 13, who is in seventh grade, and a daughter, 7, who is in second grade.
Smither, who started his new job at MVB on Aug. 16, and his family, have been busy settling in, but they already feel at home.
“I like it a lot here,” he said. “It’s really quiet. People seem super nice. I haven’t met anybody that wasn’t.”

Listen to this post MEEKER I On Dec. 9, 2010, Judge Walker Miller of the U.S. District Court for the District of Colorado issued an order dismissing all claims filed by Erica Boudreaux, as the […]

Listen to this post MEEKER I After closing its doors Aug. 9, Gary’s Steak House and Saloon will reopen … as Fiesta Guadalajara.