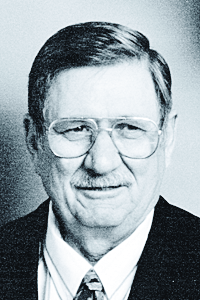 Harry Houston Peacock was born Aug. 1, 1927, in Jackson County, Fla., in the home his grandfather, Jefferson Peacock, built. He was the eldest son of Jessie Bodiford and George Clifford Peacock.
Harry was raised on the family farm and was a proud graduate of Magnolia School.
In 1951, Harry traveled by Greyhound Bus to Blue Mountain, Colo., seeking work in the Rangely oil fields. There, he met and fell in love with Lillan Nelson, and they married in Roosevelt, Utah, in 1953. Together they raised their family and resided in Rangely until 1993, when they relocated to Grand Junction, Colo., for health issues.
Harry supported his family and community well, serving on the Rangely City Council, Rangely Hospital Board, Rangely College Board, Colorado Oil & Gas Commission and as a Rio Blanco County commissioner while owning and operating several small business, including Peacock Oil Co., Peacock Well Service, Peacock Hardware and Little Rocky Construction. Harry was a member of the Church of Jesus Christ of Latter-day Saints, and an original retired rooster of the Jaycees.
Harry is preceded in death by his parents and brothers, Glen (Edra) and Virgil Peacock.
Harry is survived by his loving wife of 60 years, Lillian Peacock of Grand Junction; son Jeff Peacock of Rangely; two daughters, Denise (Jim) Henning of Grand Junction and Sandy (Kevin) Wilson of St. George, Utah; grandchildren Sara Peacock, Aaron (Crystal) Peacock, Ethan Peacock, Jessica (Cris) Zamora, Jackelyn (Jeff) Anderson, Vanessa (Pat) Keck, Samantha Peacock and Bridger Wilson; great-grandchildren Jared, Grant, Dylan, and Bayleigh Peacock and Jillian and Jerry Anderson; nieces Angie, Wilma and Sarah Peacock; and nephew Tim Peacock.
Harry was a colorful character who enjoyed a good joke or just gathering with his South Rangely Boys at the Fruita Coffee Shop. He was charitable to many throughout his life. His devoted friend, Bill Burgett, was with him when he passed away of natural causes.
A graveside service was held at 2 p.m. on Saturday, Aug. 10, 2013, at Rangely Cemetery. Cremation has taken place.
In lieu of flowers, the family has requested donations be made to the American Diabetes Association in his name.