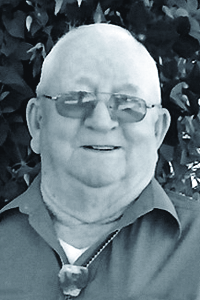 Tom Wise was born in Meeker, Colo., to Harvey and Ethel Wise on Oct. 13, 1922. He was the fifth of seven children, and the first-born son.
Tom attended school in Meeker and graduated from Meeker High School. He worked on various local ranches and rodeoed until he enlisted in the United States Marine Corps in 1943. He saw action in World War II and was honorably discharged as a corporal in 1946.
In 1948, he married Lois Lugenbeel, and they began working together on the family’s YZ Ranch.
In 1952, Tom began working for Brown Construction, which would ultimately evolve into a career as a highway engineer with the Colorado Department of Highways (CDOT).
In 1953, Tom and Lois moved to Craig, where they lived for 31 years.
While working for CDOT, Tom also became a well-known and respected radio broadcaster in Northwestern Colorado, broadcasting the state high school wrestling tournament for 15 years on KRAI in Craig. Additionally, Tom and Lois ran the LTW/ Glory Jo Trailer Park in Craig for 11 years.
Upon retiring in 1984, Tom and Lois moved to Clifton. Tom was an avid hunter, fisherman and bowler. He continued to enjoy rodeos, and thoroughly loved watching his grandchildren compete.
He is survived by: his wife of 65 years, Lois; one son, Wayne (Tammy), and three grandchildren, Phillip, Aubrey, and Jessica.
In lieu of flowers, donations may be made to either the Tom Wise Memorial Fund at any Credit Union of Colorado location or to Hope West Hospice Care Center in Grand Junction.
Services will be held at 11 a.m. at Callahan-Edfast Mortuary on Wednesday, Aug. 21, 2013, with inurnment to follow at the Veteran’s Memorial Cemetery.

Norine Holland passed away peacefully on Thursday, Sept. 11, 2014, with family by her side.

Special to the Herald Times MEEKER I The 2011 Hershey track and field games, sponsored by the ERBM Recreation and Parks District, were held May 21, on the high school track. Several competitors will advance […]