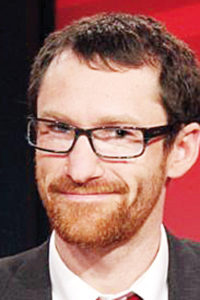 Alan Panebaker, 29, of Montpelier, Vt., died Wednesday, Sept. 19, 2012, on the Pemigewasset River in Franconia State Park in Lincoln, N.H., doing what he loved best — whitewater kayaking.
Alan was born on Feb. 22, 1983, in Kalispell, Mont., the son of Dave and Janet Panebaker of Steamboat Springs, Colo.
Alan’s loved the outdoors. He grew up in or near several national parks, in Glacier, Wrangell-St. Elias and Yosemite; and in Sylva, N.C., near Great Smoky Mountains National Park, and in Steamboat Springs, Colo., near Dinosaur National Monument.
Alan was a Class V whitewater kayaker, and paddled rivers throughout the United States, and Canada.
He took up kayaking as a member of Boy Scout Troop 914 in Sylva, N.C., where he earned the rank of Eagle Scout. He played high school soccer in North Carolina and Colorado. He was an occasional ski competitor but he mostly skied for the fun of it throughout the United States. In Vermont, he was known to arrive at work at 9 a.m. after an early morning backcountry outing.
Alan was graduated from the University of Montana School of Journalism in 2005 and cut his teeth reporting for the Ashland Daily Tidings and Mail Tribune newspapers in Southern Oregon, where he covered education and the environment. He later wrote a weekly outdoors column for the Anchorage Press in Anchorage, Alaska, and he published freelance work for Canoe & Kayak magazine.
He was graduated from Vermont Law School in 2011 with a JD and a master’s degree in environmental law and policy; he passed the Vermont bar in November 2011.
He was a reporter for VTDigger.org, covering energy, health care and the Vermont Legislature from November 2011 to July 2012. In July, he began work as Northeast Stewardship Director for American Whitewater, a river conservation group.
Besides his parents, he leaves a brother, Eric Panebaker of Jackson, Wyo.; his maternal grandparents Ed and Alice Hardy of Boulder, Colo.; and his partner, Magdalena Dale of Montpelier.
A celebration of Alan’s life will be held at 2 p.m. on Saturday, Sept. 29 at Eagle Park on Lincoln Road in Bristol, Vt. A reception will follow the gathering. There will be another gathering in Colorado at a later date.
Memorial donations may be made “In Memory of Alan Panebaker” to American Whitewater, PO Box 1540, Cullowhee, NC 28723 or www.americanwhitewater.org/content/Membership/donate/. Condolences may be sent to his parents, Dave and Janet Panebaker, 31020 Fallen Falcon Trail, Oak Creek, CO 80467.

Buddy Kenneth Linderman of Grand Junction died Sept. 12, 2010, at Kindred Hospital in Denver after a short illness. A service was held Monday, Sept. 20, 2010, at Callahan-Edfast Mortuary in Grand Junction and a […]

Elizabeth “Beth” Tucker, 80, of Grand Junction, passed away of natural causes before dawn on June 12. She was born to the late George and Sophie Foster on Dec. 28, 1932. in Craig, Colo.