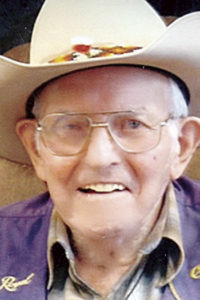 Basil Llewellyn “Luge” Lugenbeel, age 89, of Duchesne, died May 24, 2011, at the Uintah Basin Medical Center in Roosevelt.He was born July 31, 1921, in Fort Morgan, Colo., to Claude D. and Helen Dawson Lugenbeel.He married Betty Kay Purkey and later divorced. Luge attended elementary school in Wickenberg and Goodwin, Ariz. He was graduated from Rio Blanco County High School in Meeker, Colo., in 1939. He served in the U.S. Army during World War II, was in the battles at Omaha Beach and the Battle of the Bulge. He was a long-haul truck driver most of his life and worked for IML Freight of Salt Lake City for many years, he was a member of the Teamster’s Union. Luge settled in Duchesne and worked for Chevron Oil hauling crude oil. He was in the Duchesne and Altamont American Legion Posts and had been a member for 53 years.He liked telling stories, fishing, church activities, having lunches and playing bingo at the senior center, participating in American Legion events like beer wagon at the county fair, parades and being part of the military honor guard.He is survived by a daughter, LaVeta (Larry) Pennock of Rock Springs, Wyo.; daughter-in-law, Marse Lugenbeel, stepson, Russell Bedard, and a sister, Lois (Tom) Wise; grandchildren, Johnny Lugenbeel, Matt Jensen, Cammie Doyle, Jeanne Miskovsky, and Jon Scott, 13 grandchildren, and numerous nieces and nephews. He was preceded in death by children Peggy Jo Lugenbeel and John Michael Lugenbeel.Memorial services will be held Thursday, June 2, 2011, 11 a.m., at the First Baptist Church in Duchesne, 592 East 400 South.At his request, his body was donated to the University of Utah body donor program, and at a later date the family will bury the cremated remains in the Strawberry Cemetery. Condolences may be shared at www.hullingermortuary.com.In lieu of flowers the family suggests donations to the Duchesne 1st Baptist Church, the Duchesne or Altamont American Legions or the charity of your choice.

Listen to this post RANGELY I The Rangely peewee wrestlers had a strong showing in their final tournament, finishing with the most top-four placers they have had all season. At Saturday’s home tournament, seven Rangely […]

Listen to this post RANGELY I The CNCC faculty and staff would like to invite everyone to join them in bidding a fond farewell to Dr. John Boyd on the Rangely campus, Wednesday, Jan. 5, […]