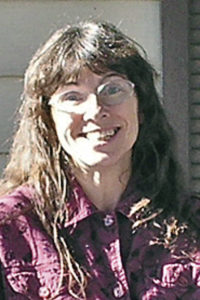 Becky Smith Johnson passed away on Aug. 13, 2012, at the Uintah Care Center in Vernal, Utah. At the time of her passing, Becky bravely battled Huntington’s Disease and cancer. Becky was born in Vernal, Utah, on Nov. 5, 1954, to George Smith Sr. and Mary Shevechick.
She was graduated from Sterling High School in Colorado in 1973. On April 21, 1974, she married Carlton R. Johnson in Cortez, Colo. They later divorced in 1992. She worked at Century 21, Toh Atin Art Gallery, TC Electric and Wal-Mart.
Becky made her home in Cortez until the Huntington’s made it difficult. In 2007 she moved to Vernal with her brother George and sister-in-law Christine Smith.
On Aug. 5, 2012, she was diagnosed with advanced cancer.
In her free time, Becky enjoyed reading, anything to do with birds; (hummingbirds were her favorite), and spending time with family and friends. She always had a smile for everyone.
Becky is survived by her daughters Trudi McClain and Kelly (Mike) Marston; grandsons Taylor and Taegan Marston; granddaughters Payton Keith and AnnaLisa Abeyta all of Cortez; father George (Phyllis) Smith Sr. of Rangely, Colo.; brothers George (Christine) Smith of Vernal, Mark (Cheri) Smith of Rangely; and sisters Paula Smith of Sunset, Utah, Sharon (Bob) Box of Northglenn, Colo., and Missy (Mike) Harvey of Spring, Texas; and many other loving family members.
She is preceded in death by her mother Mary Shevechick in 1973 and her Aunt Ann Gudac in 1997 who also suffered from Huntington’s Disease.
There was a visitation at the Blackburn Vernal Mortuary Thursday, Aug. 16, 2012.
A viewing and graveside service was held in Cortez, Colo., later in the week. Burial will be in the Cortez Cemetery in Cortez, Colo.
Arrangements were entrusted to the care of the Blackburn Vernal Mortuary, and the Ertel Funeral Home in Cortez, Colo.
Donations can be made in Becky’s name to HDSA/Rocky Mountain Chapter 6545 West 44th Ave., Wheatridge, Colo., 80032.

Listen to this post : Grant Ericksen Nielsen was born in Mount Pleasant, Utah, on July 29, 1923, the fourth of five children of Soren M. Nielsen and Florence Ericksen Nielsen.