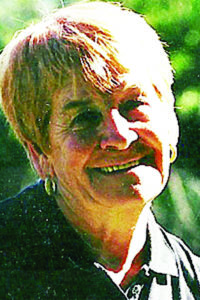 Our beloved Betty was born in Grand Junction, Colo., to Rose and Alva Newman. Betty and her twin Ruth were born on their dad’s birthday, Sept. 10, 1936. Betty spent her youth in Grand Junction and was in the first graduating class from Central High School. She is survived by three sisters and three brothers, six children, 14 grandchildren and 21 great-grandchildren.
Betty married Robert Eaton June 23, 1955, and they made their home in Fruita where their children Debbie, Lynn, Wayne and Bruce were born. They moved to Meeker in 1964. Robert passed away in 1968. Betty married Gary Robins in 1969 and Amber was born in 1970. They divorced in 1972. She was happily married to Tom Morlan from 1973 until his death in 1990. Betty married Harry Tucker in 2004 until his death in 2009.
Betty will be remembered for her love of life, of family and community. When Betty first moved to Meeker she worked as a switchboard operator. She then worked at the hospital.
In the late 1970s Betty became the first woman face boss and mine foreman in the State of Colorado. She was the safety director for Northern Coal until it closed. She then went on to assist with the running of the Buford Lodge with Harry Tucker. She was the president of the Meeker Chamber of Commerce and after her term she volunteered at the chamber.
She has joined her beloved twin sister Ruth and all those she missed so much who went before her.
Services were held April 7, 2011, at the Church of Latter-day Saints in Meeker, Colo., and many attended.
“Cry not for me cause I am not gone, I am only waiting in the presence of the Lord.”

Harman takes over at PMC

Listen to this post MEEKER I Given that his father was a doctor and his mother a nurse, it’s not surprising Ken Harman went into the medical field. But he didn’t exactly follow in his […]

Listen to this post MEEKER — Several youth from Meeker took part in the Rifle Elk Club Hoop Shoot in Rifle on Sunday.

Listen to this post MEEKER | The Meeker Streaker was busy in the month of August. Grand Junction: Six riders went for four doctor’s appointments and a shopping day. Craig: Three riders traveled to Craig […]