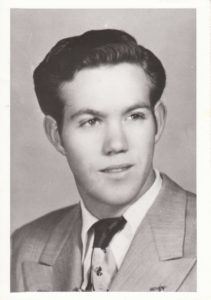 Bill Ben Allen passed away at Cottage Hospital in Santa Barbara, Calif., Dec. 27 of a severe stroke on Christmas night.
He was born on Sept. 25, 1934, in Salt Lake City, which he always referred to as the “Crossroads of the West.” He was put in an orphanage at a very early age. He lived in foster homes for a number of years before moving to Rangely, where his half-brother lived. He eventually ended up living with Robert Steele, who was the uncle of his future wife, DaVone (Allred) Allen, to whom he was married for 54 years. Together, they raised six beautiful children: David William Allen, Tressa Kim Kahler, Kara LaDawn Allen and Douglas Wayne Allen, all living in California, Vincent Clay Allen living in Washington, and Kami Racuel Powell living in England. He was the grandfather of 22 grandchildren and eight great-grandchildren.
He loved people. No one was a stranger to him and he never harbored a grudge against anyone. He was always very forgiving. He was the personification of the Good Samaritan, helping anyone in need wherever he found them.
Bill’s motto in life was: “There are mountains to climb, rivers to sail and oceans to cross.” He lived his motto. In high school in Rangely he lettered in football, basketball and track, excelling in all of them. He was one of a very rare breed who actually wrestled a bear.
Profession-ally, he was an engineer in the teamster’s union, an oilfield worker, a steel and iron worker and real estate salesman, where he was awarded Salesman of the Year. He was an excellent, self-taught mechanic. He was a jack-of-all-trades and mastered them as well. He was an avid conservative and very knowledgeable on constitutional law.
His hobbies included skin diving, boating, hunting, dancing and taking the family on wild, uncharted excursions, fulfilling his adventurous soul. Above all this, the highlight of his life was to serve an honorable two-year proselytizing and humanitarian mission with his beloved wife, for the Church of Jesus Christ of Latter-day Saints in Siberia, Russia, along the Mongolian border.
There was a memorial service in his honor at the Church of Jesus Christ of Latter-day Saints chapel in Ventura, Calif., on Dec. 31. His remains will be cremated and then interred in Vernal, Utah, at a later date.

Mount Main was a winter obstacle to be overcome

I know many people don’t care for the snow, but, myself, I am very fond of snow. I have fun memories of the snow and this time of year. I want to tell a story […]

RANGELY | Meeker has Frank Cooley. Rangely has Cecil Lollar. Together, the two men made quite a pair.

RANGELY I Adolfson and Peterson Construction, the general contractor for the new Rangely District Hospital, will host a subcontractor and supplier informational meeting at the existing Rangely Hospital on Tuesday, June 1 from noon to […]