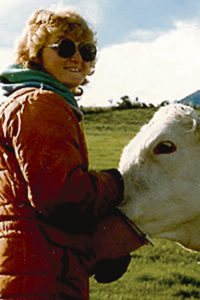 Bonnie Marie Kracht was born Jan. 27, 1959, in Fruita, Colo., to local ranchers Dick and Angela Sprod. She attended schools in Meeker and being rather adventurous got the “paddle” on occasion but mostly was amusing and perhaps a little confounding to the adults. She married Scott Kracht of Meeker in 1975, and from that union came the light of her life, her son Michael. Bonnie loved life on the ranch, helping her dad in the wheat fields, horseback riding, snowmobiling, fishing, four wheeling and raising Michael. She lived the ranching life for a number of years but along with the end of her marriage came a move to town. She worked at a variety of jobs but her focus was mostly on Mike’s schooling and upbringing. In the mid-1990s Bonnie began work as the office manager for the Meeker Chamber Commerce. While working there in 2002, she met her future husband Tom Alley, a “newcomer” to Meeker. They soon began a relationship that would blossom and grow stronger with each passing year. During that time Michael married the love of his life, Ann Mohler of Meeker, and Bonnie was lucky enough to soon become a grandmother, first to Natalie Kracht and then Julie Kracht, both of whom she loved as only a grandparent can for the very rest of her life. She was always willing to arrange her days in such a way as to be able to babysit even for just an hour or two. She believed the most important thing for a young person was the unconditional love and support of a grandparent. Bonnie loved all God’s creatures but her dogs Molly and Tuggy were as important as many of the people in her life. Although confined to a wheelchair for many years with several very serious diseases, she lived life as if she was in perfect health, often seen zooming around town in her electric scooter, grandkids in tow, on her way to get the kids a treat or perhaps an ice cream on a summers day. Her earthly time came to an abrupt end the night of Oct. 18, 2016, when she passed away peacefully in her sleep. She is survived by her mother, Angela Sprod of Grand Junction, son Michael, daughter-in-law Ann, beloved grandchildren Natalie and Julie, and husband Tom, all of Meeker. She has a brother Les and a sister Susan both of Meeker, along with numerous nieces and nephews. Her father Dick Sprod, her aunt Jerry Flaherty and her beloved nephew Jeb Berthelson all preceded her in death. Memorial services were held at 11 a.m., Monday, Oct. 24, 2016, at St. James Episcopal Church in Meeker. Donations to the M.S. Society or the ASPCA are suggested.