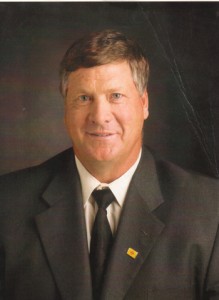 Darryl Dwight Stout died Friday, April 23, 2010. He was born in Mooreland, Okla., on May 27, 1951, near the family’s cattle operation. The second child of Lovella (Fern) Stout and Louis Dwight Stout, Darryl attended grade school in Mooreland until the beginning of the second grade; when he moved with his family to Burlington.
Growing up on the family farm, Darryl spent many hours in the fields, nurturing crops and caring for the family’s livestock. Completing his primary and secondary education in the Burlington school system, Darryl devoted much of his time to student government, FFA and athletics. Darryl was very active in sports, playing baseball and football, running track, and his favorite sport, wrestling, where he established records that still stand today. He was described as “a lean, mean, wrestling machine.” During his freshman year of high school the Denver Post recognized him as the No. 1 seed going into the state wrestling tournament. Throughout his wrestling career, he qualified for the state wrestling tournament three out of four years.
After graduating from Burlington High School in May 1969, he enrolled at the University of Northern Colorado (UNC) on a wrestling scholarship before transferring to Colorado State University, where he received his degree in animal science. He met Diana Amick while attending UNC; they were married Aug. 29, 1971. Darryl and Diana moved to Meeker, where he worked for Diana’s folks on the family ranch, located four miles south of town on the “Mesa,” eventually purchasing part of the Seeley ranch on Flag Creek, doubling the capacity of the ranch. To this union were born two children: Trina Kay Smith (Quentin) and Shane Dwight Stout (Charlene).
Darryl was active in the local church and served as a deacon and director of music for many years. One of the greatest joys in his life was listening to good music; enjoying the numerous talented singers in and around our community. He was active in the Colorado Cattlemen’s Association and served the Rio Blanco County Stockgrowers Association as president for two years. He once said, “You’re a very lucky man if you get the opportunity to own one good horse;” he was blessed to own two, both of which carried him through blizzards and drought; into and out of the ravines, oak brush and sagebrush of L07 as he doctored and cared for his livestock ñ developing one of the premier Angus-based cattle herds in northwestern Colorado.
Ever passionate about athletics and the values they instill in young people, Meeker’s home football games found Darryl in the announcer’s booth for 15 years, giving a play-by-play of the game for all to hear. He also spoke as a guest speaker for the annual football banquet on several occasions, as well as presented scholarships to Meeker’s graduating seniors. One of Darryl’s passions was the local REA Cooperative, where he served as a director for the White River Electric Association (WREA) for 15 years. He also represented WREA on the Tri-State Generation and Transmission Board of Directors for 12 years; serving as their board secretary.
On Oct. 7, 2001, Darryl married his longtime friend, Susan Marie Gates at “The Northwood’s Inn,” (one of his favorite restaurants) in Littleton. Throughout their marriage, they enjoyed traveling together, getting the opportunity to visit Port Aransas, Texas, as well as the Hill Country of Texas, the eastern seaboard, Canada, Mexico, Arizona and California oftentimes with extended family and friends. Wintertime found Darryl and Susan enjoying time away from cold and blustery Meeker; soaking up the sun in the southern parts of the United States with his and her parents: Louis and Fern Stout, and Bill and Charlotte Brown, as well as their dear friends Les and Susie Sprod, and Darwin and Jeanette Sainz. But every spring and summer found them back in Meeker; caring for their cattle herd, riding their horses, and enjoying the mountains and wildlife of northwestern Colorado.
One of the greatest joys in Darryl and Susan’s life was enjoying their grandchildren: Tristan (9), Tannen (9), Tatumn (6), Trae (5), Analeigha (4), Spencer (3), and Nicholas (4 months). Shooting ground squirrels; riding horses; moving, branding, feeding, and calving cows; bouncing in the tractor, riding in the Ranger, and working with the kids’ animal projects were favorite pastimes as they loved, spoiled and cherished their grandchildren.
Darryl’s strong faith in the Lord held him in good stead throughout all of life’s hills and valleys; he was truly the anchor that held his family together. He is survived by his wife, Susan; parents, Louis and Fern Stout; daughter Trina Smith (Quentin) and son Shane Stout (Charlene); step-children Ty Gates (Rachel), Tel Gates (Ashlie), and Tanisha Gates (Sam); sister Cheryl (Harold) Naughton and brother Gail Stout; nieces and nephews Clay (Stacey) Naughton, Tana Naughton, Kent (Kelyn) Naughton, Diana (Will) McCall, Kelley Stout, and Jon Stout; seven grandchildren, Tristan Gates, Tannen Kennedy, Tatumn Kennedy, Trae Kennedy, Analeigha Stout, Spencer Gates, and Nicholas Gates; and many extended family members including aunt and uncles, cousins, nieces and nephews, friends and colleagues.

Listen to this post Toni Simmons is ready to get her life back. Toni recently received the news she has been waiting for — she is cancer free. “It was like the whole world was […]

Listen to this post For the past five years, golfers from Meeker and Rangely have played matches against each other, alternating courses each year.

Sixth-grader recoving from his injuries

Listen to this post MEEKER I Two days after undergoing surgery Oct. 27, Dade Heck came home. A week earlier, Dade, a sixth-grader, was injured in an accident Oct. 22 during recess at Barone Middle […]