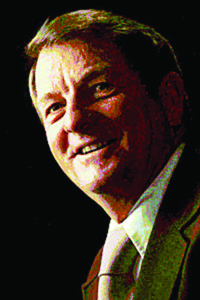 As a beautiful sun rose over the prairie on Easter morning, April 24, 2011, Donald Odell Rooks Sr. returned to his Heavenly Father after a short stay in a hospital in Omaha, Neb. He was 79.
Don was born in Marianna, Fla., on Nov. 25, 1932, the second son of Edna “Lee” and Wilford L. Rooks. Don spent his early childhood years in the Marianna area, enjoying swimming in the rivers, fishing and participating in many outdoor activities. He lived near his grandparents and many other relatives, spending many hours associating with family members and friends.
At the age of 14, Don moved with his parents and older brother to Rangely, Colo., where Wilford was employed in the oil industry. Don attended schools in Rangely, where he played football and basketball on the school team, graduating with the class in 1949. At graduation he was awarded the distinction of being the “Most Studious.”
He met his eternal companion, Clara Florence Yates while she was visiting Rangely one summer. They were married on Nov. 4, 1951, and their marriage was later solemnized in the Salt Lake City LDS temple. They are the parents of three children: Donald O. Rooks Jr. of Salt Lake City; Dana Bean of Omaha, Neb., and Elizabeth Priest of Bakersfield, Calif.
Don began a successful career in the bulk oil and service station business in 1951 when he leased the Frontier station on East Main in Rangely. He later became the Husky dealer and built a new building across the street from the Frontier in 1961. In 1970 he was awarded the Colorado Dealer of the Year by the Colorado Petroleum Council, based upon community service and standards of operation and management. He then became a Sinclair dealer until he retired in 2007. Don was known as hard-working and pleasant-mannered, and could usually be found working long hours at his service station. He acquired a reputation for integrity because of his honesty, fairness and dependability over the years.
Don was active in many community affairs, serving on the Rangely Board of Trustees, the Sanitation Board, Moon Lake Electric board, and as president of the Rangely Hospital Board. He has also been an active member of the Church of Jesus Christ of Latter-day Saints, serving as bishop’s counselor, bishop, and high priest group leader in the Rangely Ward, as well as second counselor in the Meeker Stake Presidency, along with many other positions.
Don is survived by his wife Florence, children Don (Eileen) Rooks, Jr., Dana (Keith) Bean, and Elizabeth (Jeff) Priest, eight grandchildren and 11 great-grandchildren. He was preceded in death by his parents, Wilford and Lee Rooks; older brother Herb Rooks; sister Amelia Rooks; son-in-law Steve Peel and grandson Anthony Jordan Rooks. The family will receive friends on Friday, April 29 at 10 a.m. at the Rangely Ward Church of Jesus Christ of Latter-day Saints. Funeral services will follow at 12 p.m. and interment will be in the Rangely cemetery.

The membership of Moon Lake Electric Association voted by a wide margin Thursday to impose more stringent term limits on those who serve on the cooperative’s board of directors.

RANGELY | Alex and Jaime Sanchez, boxing brothers and coaches at Sanchez Brothers Boxing Gym in Rangely, have been working their way through the boxing world. Alex, 17, is a soon-to-be Rangely Jr./Sr. High School […]