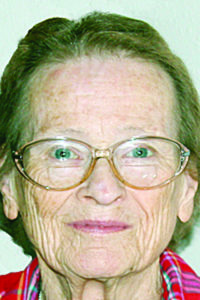 Ralph and Helen Tagert celebrated the arrival of their baby girl, Doris Helen Prockup, on Sept. 3, 1929, in Denver.
Doris spent a joyous childhood in Meeker, followed by attending Western State College in Gunnison. After college, she returned to Meeker where she taught at the Marvine School. It was during this time that Doris met the love of her life and future husband, Joseph Prockup.
Upon returning downriver to Meeker, Doris and Joe were married July 17, 1953. The young couple were blessed with two beautiful daughters, Donna and Janet, in 1954 and 1955, respectively. Later, Doris enjoyed 25 years as the librarian at Meeker Elementary.
Doris and Joe spent their leisure time camping, fishing and exploring the high desert of northwest Colorado and Utah with friends and family. She loved puzzles, crocheting and would patiently play Chutes and Ladders for hours with her grandchildren.
The couple moved to Grand Junction in 2000 to indulge in the warmer climate. In most recent years, Doris was honored to attend her grandson’s graduation from the University of Wyoming, watch her granddaughter get married on her parents’ old family ranch just west of Meeker and had the opportunity to hold her two great-grandchildren.
Like an angel, Doris passed away April 7, 2011, at the Hospice and Palliative Care of Western Colorado in Grand Junction.
Doris was preceded in death by her husband, Joseph Prockup and her daughter Donna (Prockup) Flynn. She is survived by her daughter Janet (Prockup) Dole of Grand Junction and son-in-law Roger Flynn of Fort Lupton. Grandchildren Cody Flynn of Fort Lupton and Suzan (Dole) Pelloni of Meeker. Great-grandchildren Holt and Jenna Pelloni of Meeker. Because of the wonderful care and kind, loving people who made Doris as comfortable as possible in her last days, we ask that in lieu of flowers, donations be made to Hospice and Palliative Care of Western Colorado, 3090 12th St. – Unit B, Grand Junction, Colo. 81506.

MEEKER I Doug Pfau and the Meeker School District have officially parted ways. Monday night, the Meeker School Board approved a settlement agreement that will pay Pfau, who was the superintendent for one year, a […]

I find that I am extremely confused by a current political movement. Perhaps you, your staff or your readers could help me to understand. I see and hear a great deal about a Tea Party. […]