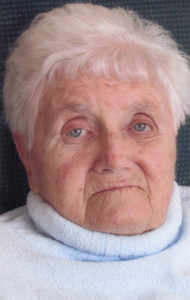 Ethel Madeline Sheffy, 92, passed away Sunday, Dec. 25, 2011, at the Walbridge Wing. Ethel was born in Lebanon, Penn., on Sept. 10, 1919, and also attended school in Lebanon. She was the middle child of the seven children of John and Julia (Hornik) Klimovsky who emigrated from Czechoslovakia. Ethel was the wife of the late Wayne Achenbach Sheffy, also from Lebanon, who passed on Jan. 4, 1989.
Wayne was in the U.S. Navy during World War II, stationed in Norman, Okla. He was transferred to Norfolk, Va., in 1944 where Ethel and eldest daughter Sherry joined him making their home in Virginia Beach. Ethel and Wayne moved from Virginia Beach to St. Petersburg, Fla., in 1980. Ethel moved to Meeker in July 2000 to be close to her daughter, Pam and family, and Sherry moved to Meeker in October 2001 to make the family complete.
Ethel’s first job was in the Nomend Hosiery Factory in Lebanon and various retail businesses in Virginia Beach before her retirement. Ethel was always ready to travel and was not afraid to try a new adventure. She loved going for rides looking at the countryside and wildlife, and checking cloud formations for recognizable shapes. She was a wonderful cook in her day and made the best pies, cookies, and cakes around. She also enjoyed dancing, playing cards, reading, needlework and especially spending time with family and friends.
Surviving are her two daughters, Sherry of Meeker and Pamela, wife of Kelly Sullivan, of Meeker, and one grandchild, McKenzie, of Grand Junction, Colo. Also surviving are one sister, Helen Rumpf of Lebanon, Penn., brother Edward and wife Mary Lou Klimovsky of Hershey, Penn., and numerous nieces and nephews scattered across the country.
She was preceded in death by her parents, husband, brother Joseph Klimovsky, sisters Julia Troy, Marion Harmuth, and Jenny Kleinfelter, all of Lebanon, Penn.
Ethel will be greatly missed by all who loved and cared for and about her.
Ethel chose cremation. A memorial service will be held at Holy Family Catholic Church on Jan. 28, 2012, at 11 a.m. In lieu of flowers, contributions can be made to the Walbridge Wing.

Judy Abbott of Meeteetse,Wyo., died in her home on Tuesday, Oct. 30. She grew up in Rangely and was graduated from the high school.

Jon was born Jan 24, 1937, to George and Cora Hertzke in Boulder. The family moved from the Eastern Slope to Grand Junction, where Jon was graduated from high school. He then attended college at […]