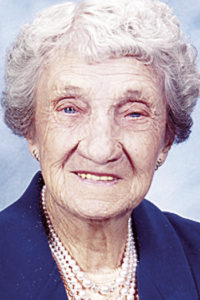 Florence Amanda Klein began her adventurous life in Kansas City, Mo., on July 28, 1911. She passed on May 26, 2011. Her parents were Dr. Thomas William and Nancy Amanda Hensal. The family lived in Northeast Oklahoma until Florence was five. The family moved to Meeker during the late spring of 1916 because of her father’s health. Unfortunately, he did not live long enough to join the family at their homestead on Lime Kiln Hill, south of Meeker.Florence and her mother lived and worked at their dry farm at Lime Kiln Hill through her high school years. The pair spent winters in town so Florence could attend school. Florence attended Rio Blanco schools throughout her school days.Florence married Julius John Klein on April 21, 1931 and together they raised six children; all of whom were raised in Meeker, Colo., and graduated from Rio Blanco County schools. It was always important to Florence that her children did not fight with one another.Florence was a terrific mother and homemaker. Friends and family remember her keen sense of humor. She always had beautiful, bountiful vegetable gardens. She was known around town for her green thumb and beautiful flowers. Roses were her favorite. Florence used her skills as a seamstress to earn income for her family. She sewed uniforms for the high school cheerleaders for several years. She also made beautiful wedding gowns for several family members and others in the community. After Florence’s children were raised, she decided to go to work outside her home. She was a favorite sales clerk at several local retail stores in Meeker. Florence retired at age 78.Florence is survived by her children Betty Joy Cook, Emma Lou Frisby and husband Dale, Fay Anna Henderson, Larry Lee Klein and wife Sandy, and Thomas Hensal Klein; daughter-in-law Mona Klein, grandchildren Lance Frisby and wife Debbie, Vicky Tate and husband Mike, Don Cook, Curtis Cook and wife Debbie, Sherie Fredrickson and husband Dennis, Kathy Kosta and husband Mark, Bentley Henderson and wife Sandy, and Caprice DuCray and husband Jay; great-grandchildren Amanda Watson and husband Will, Kelsey Tate, Christina Cummins, Alex Frisby, Cody Fredrickson and wife Angie, Eric Fredrickson, Tyler Henderson, Megan Cook, Jennna Cook, Cameron Cook, Tori Cook, Jake DuCray, Taylor DuCray, Brielle DuCray; and great-great-grandchildren Keenan Jensen and William “Deuce” Watson.Florence was preceded in death by her parents Thomas and Amanda Hensal, husband Julius John Klein, and son Julius John Klein Jr.