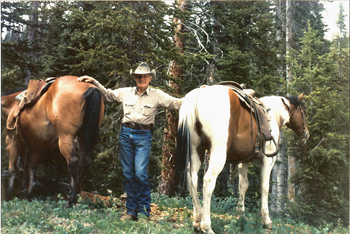 Longtime Meeker rancher George Stanley Layton, 86, passed away on Aug. 31, 2010, at the Walbridge Wing Nursing Home.
George was born May 16, 1924, in Aspen to Stanley and Mabel (Augustine) Layton. George lived in Aspen for the first two years of his life until his family moved to Meeker in 1926. In Meeker, the family first lived in the Tomlinson house on the east end of LO7 Mountain. The family later leased and then purchased the ranch at 3614 County Road 4, where he resided for 60 years.
George was graduated from Rio Blanco High School in 1942. Shortly thereafter, he was drafted into the U.S. Army and served in World War II. After returning from Japan, George married Doris Smallwood on Oct. 7, 1948, in Woody Creek. To this union three children were born.
George spent many years bareback bronc riding, bull riding, horse racing, team and calf roping. His Western Slope Rodeo Association bareback bronc riding championship award gave him many fond memories. During these years George competed all over the Western Slope, and in later years took part in the senior rodeo at Meeker. However, George made it a point to not let his rodeoing get in the way of his ranch work, and remembered the time when he injured his leg bareback riding. With a cast from hip to ankle he continued his daily 21-mile ride on the Miller Creek Ditch, but soon found that riding with a cast was more trouble than he anticipated. He sent Doris to the shop for a hacksaw, hammer and chisel; the cast was soon gone.
George and Doris spent more than 60 years ranching on the Mesa. George shared his love of horsemanship with many people. In the 1950s and 1960s, he raised some of the best quarter horses in the area. He was a great rancher, horseman, neighbor, husband, father, grandfather and friend. He was always willing to lend a helping hand. In addition, his sense of humor was enjoyed by all.
Being one of the last old time cowboys in the area, George was able to throw away his irrigating shovel and pitchfork and spend his last active years doing what he loved most, riding the range for area ranchers.
George took pride in helping his community and served on the Pioneers Hospital and White River Electric Association boards.
Surviving George are his wife, Doris; son, Nolan; daughter, Mary Herman, all of Meeker; and son, Lyle (Kathy) of New Castle. Also four grandchildren: Holly Jacobson (Mark “Jake”); Larry Layton (Megan); Sherry Layton (Omar Magallanes); Dorey Layton, and three great-grandchildren. His parents and sister, Jean Humbert, predeceased George. No services will be held at George’s request.

Letter: Thank you for emergency care

Listen to this post I would like to thank the police and ambulance crews for all their help.

Listen to this post MEEKER | The Lost Canyon Band will rock the classics, capturing the original spirit and sound in tribute to each song they perform,