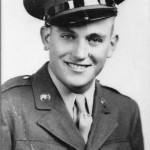 Grant Ainge, 84, of Jensen, Utah, passed away Friday, Nov. 20, in the Uintah Care Center.
Grant was born Jan. 4, 1925, in Jensen to Jonah “Nile” Ainge and Ella Sybil Fletcher Ainge.
He married Marba Ellen Peterson in Vernal, Utah, on Feb. 25, 1946. They were sealed together for time and eternity with their three small children in the Salt Lake City Temple on March 5, 1957.
Grant was born and raised in Jensen, Utah, where he was the fifth child of eight and was raised to be a hard worker and a good provider for his family. He had a great love and loyalty for his country, joining the Army at 17. He fought in World War II in the South Pacific from 1943 until 1946. When Grant returned home, he married his childhood sweetheart.
He worked many years in the oilfield for Chevron USA, in Rangely. He was owner and operator of Grant’s Spooling. Grant bought and sold many horses to sheep and cattle ranchers in the Western Colorado area. He also did many other jobs, but his great love was being a cowboy. He rode saddle broncs and participated in many rodeos in Colorado and Utah. Grant also managed the cattle operation at the K-T in Meeker. Grant spent many days on the Flat Tops above Marvine Creek, and Taylor Mountain, Utah, caring for and watching over cattle herds. 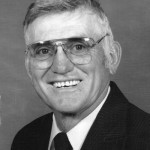 Grant enjoyed chasing wild horses with his son and encouraged his daughter in barrel racing. His children and grand-children were his greatest joy in life. When they were young, Grant would get down on the floor and pretend to be a bucking bronc. The children would climb on to his back and ride the eight seconds. He also spent many hours riding horses with his grandchildren and telling them stories of his past. He loved sharing his passion with each of them and teaching them the fine qualities of horsemanship. He was the “Good Ol’ Cowboy.”
In 2002, Grant received the honor of Legendary Cowboy of the Dinosaur Roundup Rodeo.
Grant was active in the LDS Church. He served in many callings in the Rangely, Meeker and Jensen wards. He was a great friend to many and never knew a stranger.
Grant is survived by his wife and sweetheart of 63 years, Marba; his daughter, Susan Mary (Jerry) Crook of Dinosaur; his son, Morgan Grant (Vickie) Ainge of Jensen, Utah; a brother, Shirley Ainge of Vernal, Utah; and sisters Rose Robinson of Jensen, Utah, Leafy Gardner of Oakdale, Calif., and Joy (Jay) Haslem of Vernal, Utah. He has eight grandchildren; 21 great-grandchildren and two great-great-grandchildren.
Grant is preceded in death by his parents; his son Ronald Grant Ainge; brother George Ainge; and sisters Ella May Ainge and Joan Gross.
A viewing was held Thursday, Nov. 26 at Blackburn Vernal Mortuary. Funeral services were held at the Jensen Chapel on Friday, Nov 27.
Interment was at the Jensen Cemetery under the direction of the Blackburn Vernal Mortuary. Military rites were presented by the Utah National Guard and the American Legion Post 124 and 11.

RANGELY I The team total on the scoreboard matched the number of players who suited up for the game. Neither was enough. The Panthers, who suited up a season-low 14 players, were the homecoming opponent […]

RANGELY I The Rangely Community Networking Group met Tuesday to share updates from different groups and to discuss the plan for future meetings.