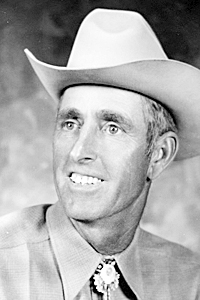 Ira (Pat) (Buddy) Clifton Johnson, 89, of Piceance Creek in Rio Blanco County, Colo., passed away June 28, 2011, at Pioneers Hospital in Meeker, Colo.
Pat was born the eighth of 10 children to the late Delbert (Dell) and Annie Johnson on Dec. 4, 1921, in Ledonia, Texas. Pat and his family moved to Piceance Creek in 1923, and Pat was graduated from Rifle High School in 1939. He married the late Mary Louise Paulson Johnson in 1945, and they lived and worked together to purchase and build the \EV Ranch throughout their lives.
Pat spent his entire life on Piceance Creek as a cattleman. Raised as the son of a hired hand, Pat rose to purchase a partial share of the \EV Ranch, which he grew through the subsequent acquisition of several additional ranches. In most ways he was a relic, an old-time cowboy stuck generations beyond the horse and buggy days of his youth; however, Pat’s work ethic and generous, caring and witty nature conspired to create a lifetime of unforgettable moments and interpersonal treasures comparable to many of today’s globetrotting 20-somethings.
Away from the ranch, Pat served more than 20 years as a member of the Rural Electric Association board of directors and was elected for more than 20 years to serve as a member of the Meeker school board. He enjoyed a weekly bowling league with Mary Lou and traveled to Europe, Mexico and Hawaii later in life.
Pat was preceded in death by his wife Mary Louise Paulson Johnson and a baby son, Clifford Rollin Johnson. Pat is survived by his daughter, Sally Lou Johnson Schultz of Piceance Creek and Surprise, Ariz.; grandson Ty Schultz and his spouse Jenny Schultz of Seattle, Wash.; granddaughter Andi Schultz Freyer and her spouse John Freyer of Denver; and five great-grandchildren: Jackson, Cutler, Sophia, Merin and Charlotte; and a sister, Beverly Shaw of Meeker, Colo.
Services were held on July 2 on the family ranch on Piceance Creek and Pat was laid to rest at Miller Hill Piceance Creek Cemetery.
In lieu of flowers, the family is requesting that donations be sent to the Pat Johnson Scholarship Fund, Mountain Valley Bank, PO Box 718, Attn: Edy George, Meeker, Colo., 81641.

Listen to this post MEEKER I A focus group meeting dealing with gifted students will be held from 3:15 to 5:15 p.m. Tuesday, Oct. 20 in the Board of Education room at the Meeker School […]

Listen to this post Mr. Daniel Glidden of Basalt, Colo., and Ms. Sharon Glidden-Cole and Mr. Charles Cole, of St. Elmo, Colo., are pleased to announce the June 15 wedding of their daughter, Madeleine McCredie […]

Listen to this post ANNOUNCEMENTS ATV, Boat and Snowmobile Owners! You can now renew your Colorado OHV registrations on line at: www.parks.state.co. your classified ad or subscription to (970)878-4016 or e-mail to: deb@theheraldtimes.com RIO BLANCO […]