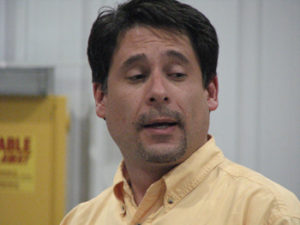 James Paul Quintana of Palisade died at the age of 43 on April 17, 2010, after suffering a heart attack.
James was born on June 4, 1966, in Pueblo to E.C. and Della (Silva) Quintana. He spent his childhood in Pueblo and Fort Collins. He was graduated from Glenwood Springs High School and attended Colorado State University in Fort Collins. He received his bachelor’s of science in chemical engineering in 1989. On Aug. 4, 1990, James married Sheila Halbach in Arvada. She survives.
James lived in Southwest Wyoming from 1990 to 2001 and then moved to Tulsa, Okla. He had been a Palisade resident for just two years. He was the operations manager at Williams Companies. He was a member of the Boy Scouts of America, having achieved the rank of Eagle Scout, one of his proudest accomplishments. James was a member of St. Joseph’s Catholic Church in Grand Junction and he was a member of the Knights of Columbus. He enjoyed model building and astronomy. James was a loving father, husband and son. He had a deep faith and trust in God. He was adored by all who knew him, and will be sorely missed.
James is survived by his loving wife, Sheila; son, Joel, and his two daughters, Megan and Lauren, all of Palisade; his parents, E.C. and Della Quintana of New Castle; father and mother-in-law, Jack and Anna Halbach of Palisade; sister Emily (Kelly) Bates of New Castle, and paternal grandfather “Grand-Po” Jose L. Quintana of Pueblo; numerous aunts, uncles, cousins, nieces, nephews and brothers and sisters-in law.
Memorial donations may be sent in James Quintana’s name to Boy Scouts of Western Colorado Council, 839 Grand Ave., Grand Junction, CO 81501.