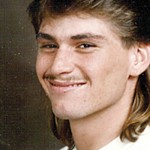 James Russell Vaughn, 39, of Silt, Colo.; formerly of Bluebell, Utah; passed away on Feb. 21, 2011 at his home from natural causes.
James was born on July 13, 1971, in Abilene, Texas to the late Jackie Clayburn Vaughn and June Wolf Vaughn.
James later moved to the Uintah Basin where he was employed in the oil field. James married Julie Atwood in 1991 and though they later divorced, together they had a beautiful daughter Denielle Preslee Vaughn. James loved his daughter very much. Denielle was the light of her daddy’s life. Denielle is married to Steven Kracht. James and Steven have been best friends for several years. James loved and considered Steven his own son. Together they had a lot of adventures and had a special relationship.
James also had two other daughters Meagan Gale and Paityn Wilson whom he loved and cherished.
James loved the outdoors and loved to hunt for rocks and go camping. James had a knack for finding heart-shaped rocks and arrowheads. James had a heart of gold and was a very caring and compassionate person. James had many friends and loved to be with people. James will be remembered for his gentleman’s ways and his integrity.
James is survived by his daughters Denielle (Steven) Kracht of Meeker, Colo.; Meagan (Alex) Gale of Vernal, Utah; Paityn Wilson of Grand Junction, Colo.; his mother and stepfather June and Acel Muse of Midland, Texas; brothers Eric and Jeffrey Vaughn of Texas; and grandmothers Joyce Vaughn and M. Wolf, both of Texas.
James was preceded in death by his father Jackie Clayburn Vaughn, and both his grandfathers.
Memorial services were held Friday, Feb. 25, 2011, in Rifle, Colo.

MEEKER I The Meeker boys golf team had just three days of practice before their first tournament last week. The 2021 fall season kicked off August 2 and the boys traveled to Delta and played […]

The ERBM Recreation and Park District is pleased to announce that they are the recipient of a 2011 EnCana grant for $5,500.