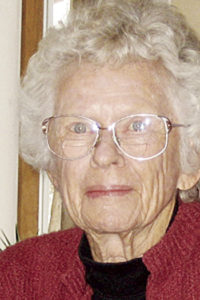 Funeral services for Jeanne N. Hollenbaugh will be held at 11 a.m., on Tuesday, June 7, at the St. James Episcopal Church in Meeker, Colo. Jeanne passed away on May 26, 2011, after a brief stay in the Lutheran Collier Hospice Center in Wheat Ridge, Colo.
Jeanne was born Oct. 14, 1921, in Meeker, Colo., to Dennis Murray and Minnie V. Elmore. She was raised on the Dry Creek Ranch in the upper White River valley. She attended school in Meeker and at the Miller Creek school. She then obtained a teacher’s certificate at Mesa College in Grand Junction and returned to teach at the Miller Creek school.
She moved to Denver in 1942, and worked for Kistler Stationary Company and Public Service Company for 11 years before returning to Meeker.
Jeanne was married to William “Bill” N. Hollenbaugh in 1953, and they moved to Rangely, Colo., in 1957, where Bill worked for Chevron and Jeanne worked as deputy county clerk of Rio Blanco County. Upon retirement, they returned to Meeker in 1984.
Jeanne was selflessly devoted to her family in every way. She was very blessed to have supportive relatives, friends, neighbors and community. Gardening was a passion and she would seldom pass up a fishing trip even in the latter years of her life.
Jeanne is survived by her son, Brad Hollenbaugh, who lives in Arvada, Colo. with his wife Laura and two daughters Kelsey and Alana. She is preceded in death by her husband, William N. Hollenbaugh, son William D. Hollenbaugh and brother Dennis F. Murray.
Memorial donations may be made to the St. James Episcopal Church, 368 Fourth St., Meeker, Colo., 81641, or a charity of your choice.

Letters: Christmas Treasure Hunt was a lot of fun

I would like to take this opportunity to thank Dee Cox of the Meeker Chamber of Commerce and the merchants of Meeker for sponsoring the Christmas Treasure Hunt.

MEEKER I After closing its doors Aug. 9, Gary’s Steak House and Saloon will reopen … as Fiesta Guadalajara.