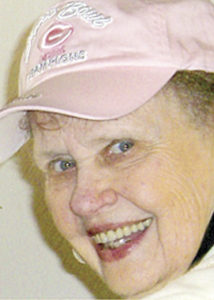 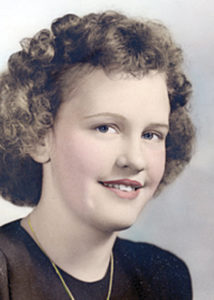 Joan “Ike” Welch was born on June 23, 1930, in Meeker, Colo., to Milton and Helen (Cotten) Welch. Joan spent her childhood in Meeker and graduated from Rio Blanco High School in 1948. She later received her associate’s degree in business from Mesa College and worked tirelessly as a manager in the retail industry.
Joan married Gene Brumback on Nov. 11, 1951, in Meeker at the Meeker Methodist Church. They were married 58 years until his passing in 2010.
Joan was involved in many community and educational activities over the years. A partial list includes scouting, Partners, Future Business Leaders of America, the Great Books program, the Lions Club and the March of Dimes. She was also a court volunteer. First and foremost, Joan was devoted to her children, grandchildren and great-grandchild. She helped with class projects, homework, field trips, parties, holiday gatherings, weddings and the notorious birthday shopping trips. She attended and encouraged family sporting events and extracurricular activities, too. Education was extremely important to Joan and she promoted learning and higher education at every opportunity. Correct spelling, polished shoes and a smile were essentials.
Joan’s personal interests included painting, reading, knitting, gardening, floral arranging, computers, cooking holiday treats, making mints, and cheering on the Denver Broncos (or “Donkeys” as she called them). She loved music and could often be heard singing, whistling or playing her favorite tunes. Her loyal Schnauzer “Shadow” was also very special to her. Joan was famous for talking with her hands and at a young age acquired the nickname “Ike” after Ike Eisenhower. This nickname followed her throughout her life. Joan is survived by her daughter, Kathy (Bud) Glover of Grand Junction; son, Kent (Lorie) Brumback of Clifton; sister, Georgia (Albert) Hicks of British Columbia, Canada; granddaughters Andrea Glover of Parker, Breanne Glover of Grand Junction, Lyndsi (Shaun) Cooney of Fruita, and Krystal (Stephen) Silva of Grand Junction.; grandson Tyler Brumback of Grand Junction.; great-granddaughter Caitlyn of Parker; and nephews, Ken (Barb) Hicks of British Columbia, Canada, and Mickey Hicks of Alberta, Canada. She was preceded in death by her husband Gene Brumback and son, David.
Joan will be remembered for her many talents, love of family and friends, stubborn determination, endless generosity and homemade fudge. This amazing woman will be missed immensely.
A graveside service for Joan will be held at the Meeker Highland Cemetery on June 2, 2012, at 11 a.m., with a reception following at the Meeker Methodist Church. Arrangements are under the care and direction of Callahan-Edfast Mortuary. Contributions may be made in her name to Alpine Home Care and Hospice, Home Care of the Grand Valley, St Jude’s Children’s Hospital or the March of Dimes.

Barbara Hennerman was born in Kansas City, Kan., and studied the electric steel guitar at a very early age. Facebook Notice for EU! You need to login to view and post FB Comments!