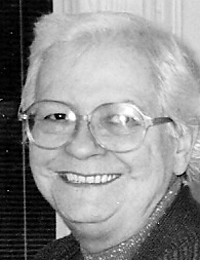 Judy L. Stacey was 62 when she lost her battle with breast cancer on Sept. 14, 2009, at the Rangely District Hospital.
Judy was born in Mt. Airy, N.C., to Walter and Peggy Lowry. They moved to New York City where Judy excelled in academics in school. Judy and her brothers and parents moved to Jamaica, N.Y. She was graduated from Richmond Hill High School and soon joined the Air Force. After serving in the New Mexico area, Judy was honorably discharged from the Air Force. She moved back home to New York and worked at a publishing company, which started her love for collecting the books that she read.
At 24, she decided to move back out west and lived in Salt Lake City most of her adult life. She married Bill Rule in 1973, they later divorced.
She spent all her time going to school and working to become a CPA, which she did for 15 years as The Bookkeep.
She soon met and married Bruce E. Stacey on July 29, 1981. They traveled together for many years right up to his death Jan. 16, 1999. Their destinations were all over the United States, Canada and Mexico. Mexico was by far their favorite place.
After Bruce’s death, Judy went to work for Radio Shack. She really loved it there. She suffered a stroke on July 24, 2003. She fought hard and worked her way back to being able to take care of herself. Reading was her passion.
In January of 2007, Judy was diagnosed with breast cancer. She went through chemo and radiation but the cancer spread to other organs and became terminal. Judy put up a courageous fight until Sept. 14, 2009.
Survivors include one sister, Lissette and Raymond Torsell of Rangely, four brothers, Gray Lowry of Lehi, Utah, Greg and Tracy Lowry of Springfield Center, N.Y., Jim and Terri Lowry of Eaton, N.Y., and Mike and Susan Lowry also of Eaton. She is also survived by 10 nieces and nephews, Ryan and Becca Torsell, Wesley and Whitney Torsell and Jamie Torsell, all of Rangely and 12 great-nieces and nephews.
Her parents and a niece, Scarlett Lowry, have preceded her in death.
Cremation has been chosen and a memorial service will be held at 11 a.m. Friday at the Bible Baptist Church. Judy’s cremated remains will be scattered along with Bruce’s at South Pass, Wyo., in the spring of 2010.
Cochran’s Rangely Mortuary has been entrusted with the funeral arrangements.

Listen to this post By JEFF BURKHEAD jeff@theheraldtimes.com RANGELY I There will be some new faces on the town’s board of trustees, as well as some familiar ones. Paula Davis was elected mayor of Rangely […]

Listen to this post RBC I This week’s Meeker Chamber Member of the Week is Meeker Chiropractor Center. To read the story, go to www.meekerchamber.com.