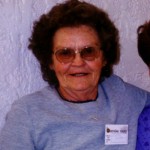 Lorine U. Nielsen, 83, passed away July 10, 2009, at the Community Hospital in Grand Junction. Lorine was born on Aug. 5, 1925, in Caldwell, Texas, to Emil and Hattie Uhlig. She married Howard Soren Nielsen on July 16, 1943, in Mt. Pleasant, Utah. They were later sealed in the Salt Lake Temple on Jan. 28, 1966.
She was preceded in death by her parents, husband, five sisters and four brothers. She is survived by her six sons, Howard Lee (Chong) Nielsen of Aurora; Alan (Cyndi) Nielsen of Meeker; Soren (Anna) Nielsen of Grand Junction; Emil (Marti) Nielsen of Saguache; two brothers, Raymond (Fay) Uhlig of Sequin, Texas, and Gus (Dorothy) Uhlig of Adkins, Texas; one sister, Mildred Horak of Caldwell, Texas; 14 grandchildren and 22 great-grandchildren.
Funeral services were held at 11 a.m. Wednesday, July 15 at the Meeker LDS Chapel. Interment in the Howard S. Nielsen Memoral Park under the direction of Cochran Memorial Chapels.

Coach Hallie Blunt thanks her players

In the past month since I was not offered my coaching contract, I have had a lot of time to think and I want to address one key issue: The kids.