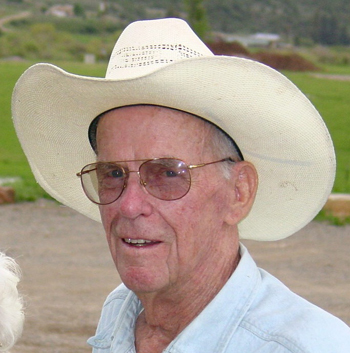 Lt. Col. Herbert Cunningham Showers, USAF retired, 93, peacefully passed away surrounded by his loved ones on Nov. 3, 2010, after a short battle with pneumonia.
He was born Dec. 5, 1916, in Everett, Wash., was a resident of Las Vegas and a summer resident upriver from Meeker since 1972. Herb was a B-17 pilot with the 8th Air Force, 390th Bomb Group in World War II, flying 35 bombing missions over Germany in just over three months. He flew over the Normandy Beachhead on D-Day, June 1944, and also flew in the Berlin Airlift following the war. He flew various aircraft for the rest of his career, and retired from the Pentagon in 1964.
Following his military service, he worked as the Las Vegas downtown city parking garage manager, retiring after 14 years. Herb began playing golf at the age of 12 while working as a caddie and he became an accomplished golfer, winning the Bermuda Amateur two years running. He was also a member of the Nevada State Seniors Golf Association, and won the state championship title twice. At age 90, he could still shoot his age.
He and his family spent their summers at their cabin near Meeker, where he spent his days golfing at the Meeker Golf Course, fishing the White River and transplanting blue spruce.
Herb is survived by his wife, Betty, son David (wife Melissa) of Kansas City, Mo., daughter Linda (husband Erick) of Colorado Springs, daughter Dawn (husband Mike) of Las Vegas, grandsons Matthew and Robert Showers and Joseph Harris, and his dog, Kallie. He was a man of great character and integrity, and will be missed by all whose lives he touched.
A memorial service was held Monday. In lieu of flowers, donations may be made in his name to the 390th Memorial Museum Foundation, 6000 East Valencia Road, Tucson, AZ 85756. Sign his guestbook at www.reviewjournal.com/obituaries.

Listen to this post Kenneth Wade Keeble, who was raised in Meeker, passed away with his wife, Gay, at his side March 6, 2008, in Kingman, Ariz. He suffered complications from pneumonia. He was born […]

Listen to this post RBC I This week’s Meeker Chamber Member of the Week is Western Slope (FSBO) For Sale By Owner. To read the story, go to www.meekerchamber.com. This week’s Rangely Chamber honoree is […]