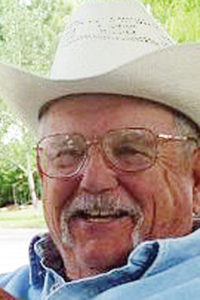 Lindil D. “Lynn” Lenington, 84, of Meeker, died from complications of a stroke on Sept. 24, 2012, at Pioneers Medical Center surrounded by the mountains he loved so much. Lenington was cremated at his request and will have his ashes scattered at Bessie Falls at Himes Peak outside of Meeker this spring. A memorial service will be held at 6 p.m. Oct. 24, at the Meeker Assembly of God Church.
Lynn Lenington was born in Lincoln County, Mo., to Ernest and Marie Turnbough/Lenington and spent much of his early life in towns along the three large rivers in Illinois. Lynn moved from Bethalto, Ill., to Greenville in May 1965 where he opened Lynn’s True Value Hardware after partnering with Stanley Getz for a short time. Lenington retired on Dec. 31, 1999, after 34 years at Lynn’s Hardware.
Lenington was a veteran of World War II. He enlisted in the Merchant Marines in 1944 at the age of 17, and was in Japan three days after the surrender. Upon his discharge from the Merchant Marines, he joined the U.S. Army in January 1946 and was discharged at Ft. Lewis, Wash., in July 1947. Lenington used his G.I. Bill and attended college at Shurtleff/SIU, Washington University and the University of Illinois.
On Jan. 11, 1947, Lenington married Mary Lucille Talkington. This marriage ended in divorce. In January 2002, he fulfilled one of his lifelong dreams and moved to Meeker where he had hunted for more than 40 years. In November 2002, he married Sally Schuster, who was his wife at the time of his death.
Survivors include his wife, Sally Schuster-Lenington; his ex-wife, Lucille Lenington; his son Dane (Carol) Lenington, daughter Shari (Denny) Grant, both of Greenville; stepson Warren (Deborah) Evans; three sisters, Mrs. Janet (Tommy) Tindell, Mrs. Lucerne (Lowell) Healy, and Mrs. Bernice (Howard) Rands; one brother, Earnest (Betty) Lenington; six grandchildren, two step-grandchildren; and nine great-grandchildren. He was preceded in death by his parents, his older sister, Doris (Bud) Depper, and a grandson, Nathan Dane Lenington.
Lenington was currently attending church at the Meeker Assembly of God church, and was both a deacon and an elder for many years at the Greenville First Christian Church. Lenington was both a Boy Scout and a scout leader earning his Eagle scout rank with two palms and the Order of the Arrow. He was an avid (HAM) amateur radio operator (K9DSN), and was a lifelong horseman and avid elk hunter. Lenington was the president of the Illinois Retail Hardware Association for several years and served on the Greenville City Counsel.
For those who desire, memorials may be made to the Assembly of God of Meeker, Colo., the First Christian Church of Greenville, Ill., or the Boy Scouts of America. Lenington lived a long and active life, and left it the way he would have wanted, in the mountains, surrounded by his family.

Listen to this post Wayne Erekson (Cooper), 43, of Las Vegas, Nev., passed away at his home.

Listen to this post Gary Clyde Coulter was born June 4, 1934, in Glenwood Springs, Colo., to Harlen and Ruby (Snyder) Coulter. He passed away at home, surrounded by family, on Dec. 15, 2013.