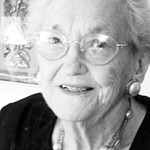 Mary Eleanor Hossack passed away peacefully at her home the evening of Dec. 20, 2010, at the age of 98.
Mary was born to Fred and Eleanor Hamilton four miles east of Meeker as the fifth of six children. She enjoyed riding horses on their ranch up the river, listening to her dad play the piano while the kids danced, sledding in the winter, going on picnics in the summer and playing cards with the family. She had fond memories of her parents singing and dancing. They had a radio, a Victrola and a piano. Sometimes they would hook up the sled and visit friends up Little Beaver and play cards until the wee hours of the morning. Eleanor would warm bricks and wrap them in cloth to keep the kids warm on the sled and also in bed.
Mary married Donald Hossack when she was 21 years of age. They had two sons, Charles Erroll (born in 1934) and Donald Hamilton Hossack (born in 1940). She loved the Broncos, soccer and basketball and attended many of the games that her sons and grandchildren were in as well as nieces and nephews.
Mary was a stay-at-home mom while the boys were still home, then she returned to work at the Gambles store for Mr. and Mrs. Odon Harris for 10 years. Afterward she worked at the Meeker Drug for Mr. Blagg, but retired in 1971. After they were both retired (Don from the Texaco Company at the Wilson Creek field), they purchased a small camper and went camping, fishing and traveling. They went around Colorado and also to Texas to visit family, Arizona and Florida (Donald had a family by then and lived in Paxton, Fla.).
Mary was a member of the Order of the Eastern Star, the Methodist Church and during World War II was the head of Meeker’s Red Cross. As a young lady she and other Meeker residents met and shared dinner with Eleanor Roosevelt at the Buford Community house.
She was preceded in death by her husband in 1995, sons Erroll in 2006 and Donald in 2004. She was also preceded in death by her mother, father and all five of her brothers and sisters as well as two grandchildren. She is survived by three grandchildren: Lori, Kirk and Brett; two great-grandchildren, Porter and Ellie; two daughters-in-law, Sandy and Janice; as well as many close nieces and nephews; Joni Davis, David Morlan, Liz Ducey, Philip Morlan, Tina Morlan. All of the many relatives of Mary will miss her stories and knowledge of Meeker and family history.
She will be buried at the Highland Cemetery after a service by Pastor Johnny Arrington at the Methodist Church on Jan. 7, at 11 a.m.

Listen to this post MEEKER | Join us for an Ideal You introductory workshop Tuesday, July 18 at 6 p.m. in the Hugus Building seminar room upstairs, 592 Main St. Learn more about our medically […]

Letter: Proud that Pledge is said every day

Listen to this post I want to give credit for “The Pledge of Allegiance” in pre-school and in my day, kindergarten, to the teachers who are the ones that have taught this patriotic act in […]

Listen to this post Mary Louise Christman, formerly of Oxford and Pine Village, Ind., passed away peacefully in Meeker, Colo., on May 18, 2013, following a long period of poor health.