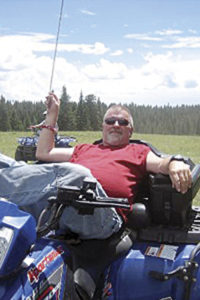 Matthew D. Phillips, 54, passed away July 8, 2012, at Broomfield Skilled Nursing Facility from complications with prostate cancer. He was born Sept. 23, 1957, in Newton, Kan., to William and Beverly (Land) Phillips. Matt was raised in Boulder, Colo., where he was graduated from Fairview High. After graduation he enlisted in the Army. He married Barbara Adcock and they resided in Louisiana. To that union a son was born. He returned to Colorado in 1987 to live in Meeker where he met Valerie Bina at the Meeker Bowling Alley. They were later married in the park. To that union a daughter was born.
Matt was skilled in maintenance jobs and continued his career with Roaring Fork School District in Glenwood Springs, Colo., in facilities maintenance for more than 20 years. He was an avid golfer, loved being outdoors, hunting, camping and riding 4-wheelers with friends and family.
Matt was preceded in death by his wife Valerie (Bina) Phillips. He is survived by his children Joshua of Lafayette, La., and Grace of Lafayette, Colo.; parents William and Beverly (Land) Phillips of Erie, Colo.; sister Candi (Steve) Cloud of Lafayette, Colo., and nephews Sean (Brenda) Cloud of Okinawa, Japan, and Scott (Sarah) Cloud of Lafayette, Colo. He will rest in peace with his wife Valerie in the Meeker Highland Cemetery. There will be a celebration of life on Sept 22, 2012.

Mary Jeannette Price of Meeker, Colo., passed away June 16, 2013, in Wheat Ridge, Colo., after a long battle with cancer.