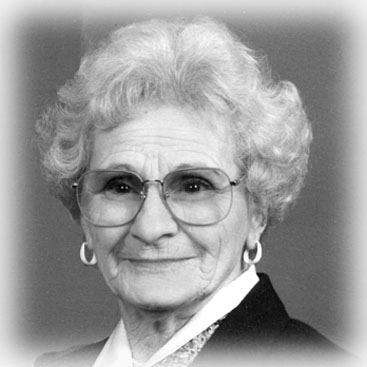 At one of the many family reunions Maxine organized, she wore a hat that said, “I am the leader. Which way did they go?” She was indeed our leader and she always knew which may we were going.
Maxine passed away Monday afternoon, Nov. 2, 2009, of complications of pneumonia, at 90 years of age.
She was born in Muskogee, Okla., and lived most of the past 60 years in Rangely and Palisade. Maxine was an active church member, a supportive wife, a champion golfer, and most importantly, a wonderful mother, grandmother, great-grandmother and great-great grandmother. Many of her grandkids called her “Sassy.” The name “Sassy” was an early attempt to say Maxine, and it stuck. Sassy she was and Sassy she will always be. We will miss her.
Maxine was preceded in death by her husband Chuck Enterline, her mother Lily Mae McMullen, her four brothers, Bill, Dude, Dewey, Joe, her sister Aileen and a grandson, Casey Turner. She is survived by her eight children, Judie Jimenez (Johnnie), Bill Turner (Annie), Pam Hopkins (Gary), Harold Ray Turner (Lorraine), Mike Enterline (Joy), Joe Turner, Debbie Gabin (Mike) and Rory Enterline (Tracy) along with many, many, many grandchildren.
Services were held Thursday, Nov. 5, 2009, at the Northeast Christian Church, Grand Junction. Burial followed in the Palisade Municipal Cemetery.

MEEKER | The ERBM Recreation and Park District is sponsoring a free Family Swim Day and Soup and Dessert Cook-off Saturday, Feb. 13. Free swimming will be during normal pool hours from 8 a.m. to […]

MEEKER I More than 40 ladies competed in the annual Ladies Deerfly tournament, hosted by the Meeker Ladies Club at the Meeker Golf Course last Saturday. The annual two-lady scramble featured 21 teams from courses […]