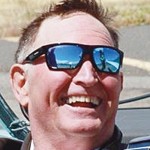 Michael Patrick Steele, born Sept. 3, 1946, in Daly City, Calif.,to David and Thelma Steele, passed away suddenly at his home in Meeker, Colo., on Nov. 2, 2013. Mr. Steele had just celebrated his 67th birthday. His father and a sister, Bonnie, preceded him in death.
Mike was graduated from Jefferson High School in 1964 in Daly City. From there, he joined the U.S. Navy and enjoyed visiting and touring various ports around the world. In 1968, he joined Mantee Scale Co, out of San Francisco, later opening and managing an office in Sacramento.
As technology changed and scales became computerized, he moved to Reno, Nev. In the 1980s, he started working for Kennecott Gold out of Fallon, Nev., later moving to Meeker with Kennecott at ColoWyo Coal. He was a heavy equipment operator while there, retiring in 2010.
One of Mike’s favorite part-time jobs was a role player at Colorado Northwestern Community College in Rangely, helping train new U.S. Forest Service recruits.
He also loved gliding and soaring up with the eagles, his favorite airport to glide from was in Minden, Nev.
In 2004, Mike met and, in 2006, married Leila McPherson Kehmeier from Cedaredge. They enjoyed lots of laughter and adventures for the past 7-1/2 years.
Michael is survived by: his wife, Leila; a son, Matt (Jestina) Steele of San Jose, Calif.; stepchildren Derek (Dasha) Kehmeier of Cedaredge, Colo., Chris (Leslie) Kehmeier of Golden, Colo., and Colyn (Jess) Wiening of Bozeman, Mont.; brothers Gordon (Virginia) Steele of Pasadena, Texas, Mike Cecconi and Joe (Kim) Cecconi, of San Jose, Calif; sisters, Cindy (John) Reedy of Mantiqua, Calif., Tracy Urbina, (Eddie) of San Jose, Calif., Kelly (Roger) Thorne of Sacramento, Calif, Sherry Shea of Bakersfield, Calif., and Kerry (Kerry) Fitzpatrick of Yuba City, Calif.; six granddaughters; and many nieces and nephews.
A memorial service will be held at The Church at Meeker, 1287 Market St. at 1 p.m. on Saturday, Nov. 9, 2013.
Donations may be made in Mike’s name to the Meeker Public Library or the Meeker Food Bank.

Listen to this post Elizabeth (Ferenczi) Hinaman, aka Betty, Mom, Grammy, Aunt Betty and Mrs. Hinaman, had many phases in her life. She entered her last phase on Nov. 26, 2012 when she went to […]

Listen to this post Vern Arthur Amick was born May 4, 1925, to Arthur R. and Myrtle Amick. He joined his 4-year-old brother, Harold. His birth took place in the home on the “old Fairfield […]