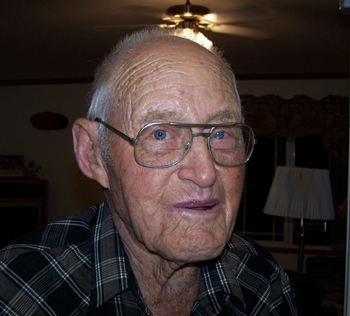 Roy F. McKee was born Sept. 14, 1910, in Los Angeles. He was the oldest of six children. Roy grew up on a farm in Bayard, Neb. He met and married the love of his life, Ruth Waterman, in 1935. He moved to Morrison, Colo., in 1938, where he managed a ranch with his brother Chester. Roy bought a ranch in upper Strawberry Creek in Meeker in 1942. He actively worked his ranch until he was 97 years old, with the help of his son Lyle.
Roy is proceeded in death by his wife Ruth and his parents James Leslie and May Schroeder. He is also proceeded in death by two sisters, Betty Cunningham and Ruth Ravert.
Roy is survived by his first born son, Vernon and his wife Frances, another son Lyle and his wife Melanie. He is survived by a brother Chester McKee from Missouri, a sister Florance Armintrout from Missouri and a sister, Mary Deegan from Montana. Roy is also survived by four grandchildren, Anthony, Eric, Donny, and Tia, as well as, three great-grandchildren Ian, Heather and Luke.
Roy passed away at his ranch on July 17, 2010, peacefully with Lyle, Melanie and their children by his side. He had a deep faith in God that impacted so many lives. His love for Christ was obvious to all that knew him. He showed the value of hard work and good character. He will be truly missed.
A visitation was Wednesday, July 21 at the Meeker Funeral Home chapel. Funeral services will be today at 1 p.m. at Grace Bible Church in Meeker, with the Rev. J.D. Watson preaching. The burial will follow at Highland Cemetery in Meeker. All arrangements provided by Rio Blanco Funeral Home of Meeker. Any donations given for flowers or funeral, the family has requested be donated to Grace Bible Church.

MEEKER I Forty-seven entries in the Meeker Classic art contest and silent auction are on display at Wendll’s Wondrous Things through Sept. 7, when they will move to the Wilber Barn at Ute Park.

Mary Arlene Brown passed away Feb. 25, 2014, in Las Vegas, Nev., due to complications from emergency surgery. Her children, Marlin Brown, Marilee Rippy (both of Glenwood Springs, Colo.) and Melissa Kindall (of Meeker, Colo.) […]

MEEKER I At a meeting of the newly organized Tea Party on May 13, Sam Thiessen was chosen to serve as president with Jim Ellis and Keith Fitzgibbons chosen as co-vice presidents. Patti Hoke was […]