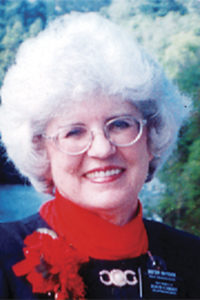 Ruthell Lamoreaux Haycock, 76, passed away Jan. 9, 2012, in Albany, Ore., from secondary effects related to Alzheimer’s. She was a woman who continually exemplified optimism, hard work, excellence, charity, patience, kindness and generosity. Born July 18, 1935, in Cedar City, Utah, to Clarence and Emily Lamoreaux, she married Donald Haycock, her husband of 56 years, in 1955, in the St. George Temple.
Ruthell and Donald spent 22 years in Lander, Wyo., where they raised their four children. Ruthell served her family and the community in extensive ways. She was a substitute and homebound teacher for the school district. Always putting others first, she served in numerous callings in the Church of Jesus Christ of Latter-day Saints including extensive leadership and teaching roles. She was known for her exquisite wedding cakes and stained-glass-like Christmas windows.
In 1984, Donald and Ruthell moved to Vernal, Utah, then to Rangely, Colo., where she continued to serve, teach and manage the family business. She had a gifted green thumbóher flower, vegetable and fruit gardens were beautiful and bountiful. In 1999, the Haycocks left to serve a two-year CES mission in New Zealand. Institute attendance doubled under their loving care. Upon return, they made their home in Orem, Utah, and completed a service calling with FARMS. As Ruthell’s health began to fail, they moved to Oregon to live with daughter Tracy and family.
Ruthell is survived by her loving husband Donald; children Tracy Crook, Michelle Taylor, Drs.’ Darryl and David and spouses; 16 grandchildren and 11 great-grandchildren; and sisters Vyonne Hamilton and Elaine Calder. She was preceded in death by her parents, brother Donald, and sister Ila.
A memorial service will be held Jan. 21 at 1 p.m. at the Church of Jesus Christ of Latter-day Saints, 1615 28th Ave. SE, Albany, Ore., with a memorial service to follow later in Utah. In lieu of flowers, donation can be made to the non-profit Grace Center for Adult Day Services, 980 NW Spruce Street, Corvallis, Ore., 97330 or at www.gracecenter-corvallis.org/donate.htm. Condolences can be sent to 1648 Salmon Run SW, Albany, Ore., 97321.

Pansy (Moore) Wilson passed away on Jan. 23, 2010. Pansy had suffered a broken hip only weeks prior to her death.