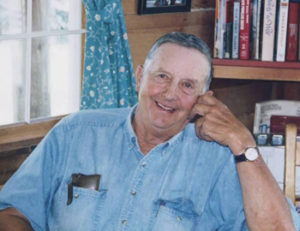 Longtime Meeker rancher Bart Strang, 81, died Dec. 3, 2009, at Pioneers Medical Center in Meeker.
Stephen Bartow “Bart” Strang was born on June 7, 1928, in New Hope, Pa., to Stephen B. Strang and Ellen (Lathrop) Strang. Bart spent his early years in Bucks County, Pa., and at the age of 8 moved with his family to Ralston Creek Ranch near Golden, Colo. The remote location of the ranch necessitated home schooling for Bart and his brother Mike. Bart finished his secondary education with his senior year at Taft School, Watertown, Conn.
Bart spent a year at Colorado College in Colorado Springs, before enlisting in the service on Sept. 27, 1950. After returning from Germany where he fulfilled the terms of his enlistment, he extended his tour of duty and volunteered for service in the Korean conflict. In Korea, he served as infantry master sergeant in a reconnaissance platoon of Headquarters Company, 179th Infantry Regiment, 45th Infantry Division, U.S. Army. Bart was highly decorated while in Korea, including two Bronze Stars and a Purple Heart. He was wounded on Heartbreak Ridge on March 12, 1953, and discharged from the Army on June 27, 1953.
Bart entered Princeton University on the GI Bill in September, 1953, and graduated with a bachelor of arts degree in history in 1957. He was captain of Princeton’s heavyweight crew. Many of his lifelong friends go back to Princeton years.
Bart and Mary Crocker, of Groton, Mass., were united in marriage on Sept. 13, 1958 in Groton. Four girls, Mary, Ellen, Lisa and Sarah were born to them. The first years of marriage were spent on the family ranch at Ralston Creek, and in 1960 they moved to Carbondale. They bought their first Hereford cattle in 1962 while ranching in Carbondale with Bart’s brother Mike and friend Tom Turnbull. In 1968, they moved to their own place on West Sopris Creek at Basalt. In 1973, the family moved to Meeker where they continued their purebred cattle business. In addition to their registered and commercial cattle business, they had a summer program for teenagers where they served as surrogate parents to 40 teens for eight weeks. Each summer, the Strang family of six grew to 60 as everyone shared life on the ranch in the Colorado high country.
An avid historian and advocate for education, youth and community, Bart often volunteered his time in the classroom and shared experiences in the Korean War and his knowledge for history. Bart served his community and industry through a multitude of boards: two terms each on the Roaring Fork School District and Meeker School District; the Colorado Hereford Association; American Hereford Association; Rio Blanco County Co-op, Yellow Jacket Conservation District to name a few. He believed in helping his fellow man, never passed up the opportunity to support kids and was a man of integrity, service and family.
Bart spent the last three years of his life as a resident of the Walbridge Wing in Meeker. The compassion and empathy of the nursing home staff made his life whole and enriched in the face of an otherwise adverse situation. His vocation as a rancher and Hereford breeder combined his passions of animal husbandry, conservation and stewardship, which served as a perfect venue to raise his family. Bart will long be remembered as a gentle, compassionate man who loved his children and grandchildren, teaching by example and humor. Bart never missed an opportunity to share his dry wit and humor which often included a large library of limericks. An eternal optimist, Bart lived life to the fullest, fully devoted to Mary, his wife and friend of 51 years. Physical limitations stemming from his military service remained his biggest trial — one he met with quiet determination and grace.
Bart was preceded in death by his parents Stephen Bartow Strang and Ellen (Lathrop) Strang, as well as his nephew Michael Lathrop Strang Jr. He is survived by his wife Mary, and his four daughters Mary (Greg) Cunningham, Ellen (Joe) Nieslanik, Lisa (Tom) Walsh, Sarah (Clint) Hjelm. Bart leaves behind 11 grandchildren: Ben, Charlie and Hannah Cunningham; Meg, Jake and Sam Nieslanik; Nate, Anna and Stephen Walsh; and Wyatt and Hannah Hjelm. Bart also leaves behind his brother Mike (Kit) Strang, and their three adult children Laurie, Scott, and Bridget and their families
In lieu of flowers, memorial contributions can be made through Cochran Memorial Chapel for a future educational endowment fund.
A celebration of life for Stephen Bartow (Bart) Strang was held at St. James Episcopal Church in Meeker, on Monday, Dec. 7, 2009. Interment with full military honors was made in the Highland Cemetery. Cochran Memorial Chapel has been entrusted with the arrangements.

The Meeker Community Choir’s annual Christmas Cantata will be held Sunday, Dec. 11, at 3 p.m. in the Meeker High School auditorium. Everyone is invited to attend.

The Meeker Herald — 100 years ago • A recent publication issued by the United States Geological Survey comments on the alarming consumption and waste of some of the country’s most needed natural resources. “The […]

Meeker superintendent of schools Susan Goettel recommended the Meeker Board of Education not renew Meeker High School principal George Henderson’s contract and the board voted 5-1 in support of Goettel’s recommendation.