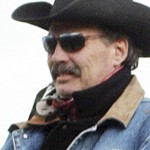 Steven C. Deyo was born Dec.15, 1959, in Craig, Colo., to Douglas and Patricia Deyo. He died Tuesday, Jan. 17, 2012, in Craig.
Steve spent most of his life forging lasting friendships in Craig, and loved to support youth sports, the local Kiwanis Club and the 4-H Club. He will be remembered by those closest to him for his outgoing personality and generosity throughout the community.
He graduated from Moffat County High School in 1978 and remains the only All-American football player to come out of Craig. Steve also attended the University of Northern Colorado, where he played football on scholarship.
Steve was a high school football referee for more than 20 years all over Colorado, where he worked countless playoff games and two state championships. He also coached football, baseball and softball.
Steve loved to spend time out on the ranch, helping run sheep or cattle on many of his closest friends’ land throughout the northwest corner of the state and into Wyoming. Many of his greatest memories were forged wearing a cowboy hat.
He had recently returned to Craig Ford to work as general manager, having previously spent more than 20 years as service manager.
Steve married Mary Lynn “Gert” Phillips, formerly of Ottawa, Ill., in 1993—a union that lasted nearly 19 years. He also raised his stepson, Jason Phillips, from an early age and the two remained close until Steve’s untimely death.
Steve was preceded in death by his father, Doug, and brother, Mike.
Steve is survived by his wife Mary Lynn, mother Pat of San Diego, Calif., stepson Jason, niece Lindsay, nephew Kellan, his beloved dog Sport, and his countless friends who treated him like a member of their family.

Listen to this post Dewey L. “Monty” Sheridan, 80, a longtime cattle rancher in Moffat County, Colo., passed away April 7, 2013, at The Memorial Hospital in Craig, Colo.