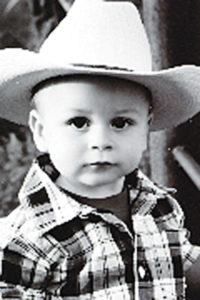 Traker Frank Dembowski was born Aug. 2, 2010 at St. Mary’s Hospital in Grand Junction, Colo. His proud parents, Scott and Melissa Dembowski, and his awesome big sister, Kastyn Rae Dembowski, took him to their home in Rangely, Colo., a few days later. Traker quickly became the center of all of their lives.
Traker was a very typical little boy who loved cars and trucks. His favorites were Lightning McQueen and Grave Digger. He loved to play “vroom, vroom” with his daddy.
Traker was learning to share, but it was soon discovered that he was not willing to share his mommy. He had to know where she was at all times. Kastyn was the only exception to this rule. Traker and Kastyn were the best of buddies.
He loved his snuggy blankets and had one with him at all times. Even during the hot days of summer, he had his smaller versions of his snuggys made by his adoring aunts. The softer, the better, but the fringe was the best part. He would rub it across his little nose and would sometimes share it with the noses of those around him.
Traker loved the outdoors. If he thought that someone was going outdoors without him, he would seek out his shoes and insist that they were put on in preparation of him going outdoors also. Even carrying the garbage was a grand adventure if he was outdoors.
He loved animals and the sounds they made. His favorite was the white tiger. He would listen and then look around to make sure that everyone else had heard it too.
Traker left his family on Jan. 29, 2012, to try on his angel wings. He left his family to the loving arms of the Rangely community and all of those that have touched their lives.
Traker is survived by his parents, Scott and Melissa, and big sister Kastyn of Rangely; grandparents Curt and Susie Dembowski of Rangely and Rhonda Baughman of Craig; aunts and uncles, Kendra and Dean Allen and Michelle and Howdy Brown; cousins Dalton and Teagan of Rangely; great-grandparents Frank and Deloris Dembowski of Utah, Jean Kump of Rangely and Carol Baughman of Oregon; numerous great-aunts, great-uncles and cousins.
Traker was met in heaven by his grandfather George Baughman; great-grandparents Myrle Dembowski, Shirl Kump, Gerald Baughman and John and Bernadine Morrill.
“Read me a story, tuck me in tight, say a sweet prayer and kiss me goodnight.”
Funeral services for Traker were held Friday, Feb. 3, 2012, at 11 a.m. at the Bible Baptist Church in Rangely, Colo. Visitation was held one hour prior to services at the church. Burial was in the Rangely Cemetery under the care and direction of the Rio Blanco Funeral Home.

Listen to this post Grace Allene Warren, 91, passed away March 24, 2015 after suffering a stroke.