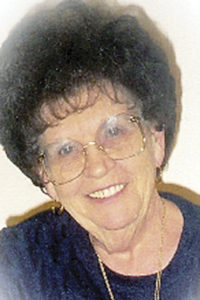 Wanda Jean Scott Kump was born Sept. 14, 1934, to Elmer O’Dell and Alice Louise Pace Scott in Wright City, Okla., at the home of her maternal grandparents. She grew up in Oklahoma and started school in a “one-room” schoolhouse.
Her family moved to Artesia, Colo., — now known as Dinosaur — in January 1948. She finished eighth grade in Artesia and then started high school in Rangely, Colo., in fall 1949. She attended Uintah High School during her senior year because her daddy had been transferred to Vernal, Utah.
It was in Vernal that she met and married Shirl R. Kump. Two children were born of this union: Delbert “Keith” and Jodi Sue (Susie). Jean moved back to Rangely in 1963 when she and Shirl started Kump Contracting. This is when she began her career as a secretary. Shirl worked in the oilfield and Jean kept all the books. At one point they owned three businesses and she kept the books for all three.
She became a member of Epsilon Sigma Alpha in 1968. E.S.A. quickly became an important part of her life. She especially enjoyed the philanthropic endeavors that she participated in through E.S.A. She was honored to be chosen as Colorado’s Outstanding Woman of the Year in 1981 and was especially honored to represent Colorado at the international convention in Dallas, Texas, as Colorado state president in 1989.
Shirl and Jean were divorced in August 1982, and she moved back to Vernal. She went to work for Target Trucking in 1984 and they became her second home and family.
She loved to raise a garden and fill her yard with flowers. Her favorite were her roses. She was an avid collector of hummingbirds and filled her home with them. She enjoyed feeding the real ones all summer long.
More than anything, Jean loved her family and made them the center of her life.
She is survived by her children, Keith (Sandy) Kump, and Jodi “Susie” (Curt) Dembowski; sister Pat Freestone; sister-in-law Kathy Scott; grandchildren Jarod Kump, Kendra (Dean) Allen Dembowski, Kevin Kump, Scott (Missy) Dembowski, Samantha (Jad) Locke, Kaitlyn Kump and Zak Kump; 13 great-grandchildren with another due in August; numerous nieces and nephews; many, many friends and uncounted E.S.A. sisters.
She is preceded in death by her parents, brother Charles G. Scott, nephew Mitchell Freestone, and great-grandson Traker Dembowski.
Funeral services were held Wednesday, May 2 at the Rangely LDS Chapel. Burial was in the Rangely City Cemetery under the care and direction of the Blackburn Vernal Mortuary.

Clifton (Dick) Ferdinand Rosenlund, 98, a loving husband, father, grandfather and long-term resident of Meeker, known for his humor and wit as well as his generous service to others, died peacefully Dec. 7, 2009, in […]