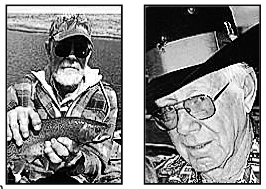 William John Bruckner passed away on Sept. 16, 2016. He was born on May 2, 1935, in Rifle, Colo., to Fredrick William Bruckner and Agnes Julia Bonis Bruckner. He did all of his schooling in Rifle and was graduated from Rifle High School with the Class of 1953. In 1955 he married Helen Francis Staley. They divorced in 1979. They had two daughters, Billie Jean in 1956 and Nancy Sue in 1959. In 1959 he was working at Foster Lumber Company in Rifle and moved on a “temporary” basis to manage the Foster Lumber Yard in Rangely. Almost 60 years later, he was still living in Rangely. He was a mechanic for McCoy Chevrolet, a lineman for Moon Lake Electric and retired in 2000 working for Rio Blanco County. He loved to fish and would take his boat out whenever he got the chance. He really enjoyed rodeo and use to spend a lot of time team roping (header). He also enjoyed going to yard sales and watching the Broncos play. He enjoyed doing things with his grandkids and his dog Flowers. James is survived by his daughter Sue of Vernal, 6 grandkids, 13 great-grandkids, and a sister Sally of Castle Rock, Colo. He is preceded in death by both parents, two older brothers: Fred and Walter, ex-wife Helen, and his oldest daughter Billie, who was killed in a car wreck in 2009. There will be no services at this time. There will be a memorial service at Matt Warner Reservoir at a later date. Online condolences may be shared at www.ashleyvalleyfuneralhome.com