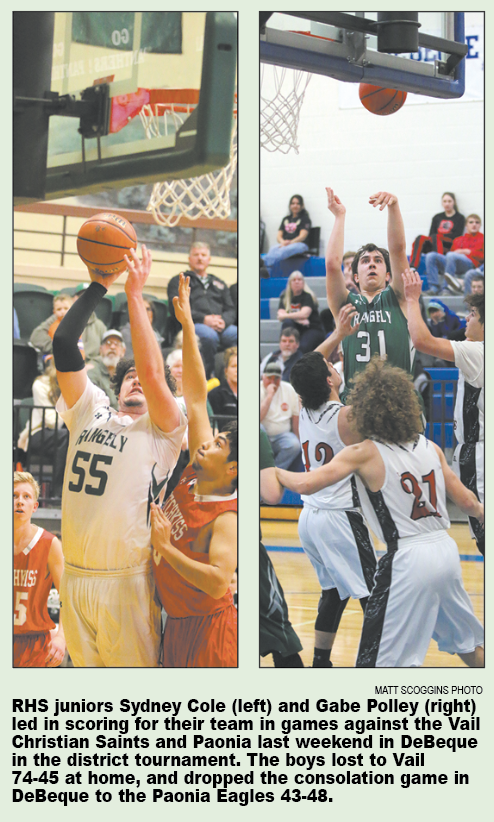 RANGELY I The No. 8 Rangely Panthers traveled to No. 1 seeded Vail Christian for a class 2A District 5 quarterfinal game.

Earlier in the season, the Vail Christian Saints defeated the Panthers 74-45 in Rangely. The Saints did not expect the Panthers to match pace with them, but the Panthers did just that, tying the game late in the third quarter. The Saints eventually broke free with their transition game in the final quarter earning a 72-57 victory. Sydney Cole led the Panthers with 24 points and 15 rebounds, followed by Gabe Polley and Ryan Richens with 12 and 10 points respectively.
The loss to Vail Christian moved Rangely to the consolation bracket where they faced Paonia on Thursday in DeBeque. Paonia’s defense prevailed in the first half as they took a 23-17 lead into halftime. Rangely outscored Paonia 12 -6 in the third quarter, but Paonia’s seniors stepped up in the fourth to earn a 43-38 win over the Panthers, ending their season. Sydney Cole once again led the Panthers with 15 points and 13 rebounds. Gabe Polley contributed eight points and eight rebounds, while Dylan LeBleu pitched seven points and four assists.

MEEKER I The lady Cowboys are district champions and will host regionals in Meeker, playing for a chance for the second year in a row to the big show. Sarah Kracht with 16 points and […]

RANGELY I The Rangely High School boys’ basketball team lost 60-44 to the Little Snake Rattlers but came back and defeated the Plateau Valley Cowboys 48-30 in front of a home crowd.

RANGELY I Rangely senior Cory Evans hit a three-pointer with 2.7 seconds left to play on his home court, to give his team a one-point victory (28-27) over the Meeker Cowboys Tuesday last.