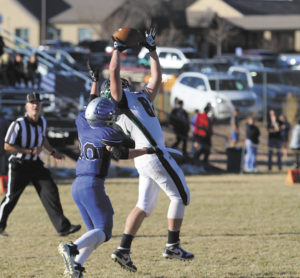 RANGELY | The Rangely Panthers football team qualified as the No. 12 team in the Colorado 8-man state playoffs. The Panthers traveled to Dayspring Christian Academy on Saturday, Nov. 9 to take on the Eagles who were the No. 5 seed in the playoff bracket. The Panthers did not come out on top falling to the Eagles 52-0, but the score was never a factor in the game based on the effort from the Panthers. Each Panther heart that day left the field knowing they gave it everything possible. The Panthers were a very young Panther team by the end of the season due to injuries to upperclassmen, so the playoff berth was a high note for the Panthers on their already successful 6-3 record in the regular season.

On the season, numerousPanthers found themselves as one of the leaders in statistical categories or amongst the top leaders in the categories. ThePanthers were also recognized Friday night by the Mile-High Preps website that publishes articles on the Colorado athletics scene for the smaller athletic classes of Colorado. Mile High Preps focuses on the classes of 2A, 1A, 8-man and 6-man for Colorado high school football. There were more Panthers on the All-League list from Mile High Preps than any of the other teams in the 8-Man Northwest League. At the top of the list was the Northwest Player of the League and Anthony Lujan was awarded this for his play on both offense and defense. On offense, Lujan ran the ball 194 times for 950 yards and scoring 16 touchdowns. Through the air, Lujan compiled 44 completions on 99 attempts for 716 yards and 10 touchdowns. On defense, Lujan led the Panthers with 134 tackles, 11 of those tackles were behind the line of scrimmage for a loss. Lujan also had three sacks, two caused fumbles, one fumble recovery, and one defensive touchdown. Lujan was also named to the Northwest League Offensive team amongst the other stat leaders in the conference.

Lujan was not the only Panther to be named to the all-offense team by Mile High Preps. Not another single member but a fantastic, most important and very hard working group of individuals was named to the all-offense team as a group and that is the offensive line members of the Panthers. Seniors Dell Garner, Hunter Hanvey, Dalton Dembowski, juniors Austin Davis, Gabe Polley, sophomores Timothy Scoggins and Byron Mackay all made up the Panther offensive line at some point in the year. Every one of the before mentioned players made critical contributions to the offensive line which the coaches deemed as one of the best attributes to our team. As an offensive unit, the O-line blocked the Panthers to their way of 2,273 total rushing yards on 393 attempts with 30 touchdowns. They also blocked for 847 passing yards and 10 touchdowns. The Panthers will return the core of the offensive line for the 2020 season next year and this will be a highlight for the Panthers moving forward. 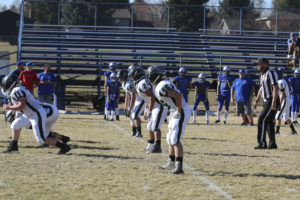 defensive play. Junior Austin Davis, junior Gabe Polley and sophomore Timothy Scoggins were all selected to the first-team all-league defensive team by Mile High Preps. Austin Davis was second on the Panthers in total tackles with 104 total tackles, one tackle for loss, three fumbles caused and four interceptions. Gabe Polley was first on the Panthers with 5.5 sacks on the year, 85 total tackles 14.5 tackles for loss, One fumble caused and four fumbles recovered. Timothy Scoggins was fourth on the team with 79 total tackles, 11 tackles for loss, two sacks, one fumble caused, three fumble recoveries and one fumble recovered for a touchdown.

Three more Panthers were awarded honorable mention honors from Mile High Preps for offense and defense. Senior Tytus Coombs was only able to play three games for the Panthers until he suffered a season-ending knee injury. Coombs carried the ball 54 times for the Panthers in the three games for 565 yards and six touchdowns. Coombs also had 68 yards receiving and two touchdowns receiving. Coombs was able to amass 840 total yards in three games played as Coombs also returned two kickoffs for touchdowns and 175 total return yards. On defense, Coombs totaled 53 tackles, three tackles for loss, and one interception. Junior Ryan Richens was also named as an honorable mention. Richens totaled the second-most all-purpose yards for the Panthers with 881 total yards on the season. Richens rushed for 151 yards, received 494 yards and returned for 236 more yards. Richens scored 10 touchdowns for the Panthers as well in the 2019 campaign. Sophomore Zane Varner was the last Panther to be named to the honorable mention team from Mile High Preps. Varner rushed for the second-best 719 yards on the Panthers and five touchdowns in 8 games. Varner also returned punts and kicks for 125 yards.

Offense and defense were not the only recognition the Panthers received in the 2019 regular season. Ryan Richens was named as the 2019 Special Teams Player of the Year by the Mile High Prep Report. Richens returned punts and kicks for 236 yards and one punt return for a touchdown. Richens also handled the kicking duties for the Panthers. Richens had 10 kickoffs for 401 total yards with one touchback and three kicks downed inside the opponents’ 20-yard line. Richens also averaged 35.6 yards on eight punts and one punt downed inside the 20-yard line.

The Mile High Prep Report does not reflect the official Northwest 8-man league awards in any way but works as an outside voice of the players in the league. The coaching staff is very proud of every Panther that was on the roster at any point in the 2019 season. Tremendous growth was made by each player during the season and the coaching staff is looking forward to turning the core of the 2019 team back for the 2020 season. The coaching staff also wants to wish every senior the best of luck with their future endeavors and also thank them for four years of hard work to making the Rangely High School football team back-to-back playoff teams since 1984. These seniors will always “bleed green” and have kept laying the foundation of the great Rangely High School football program.