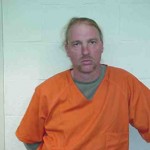 RANGELY I John Parks was arrested for the second time in two months Friday.
The latest arrest was for violating a restraining order.
He appeared in district court Friday in Meeker, was taken into custody and then bonded out.
On May 16, Parks was arrested in Rangely and charged with retaliation against a witness and menacing.
“The judge had made it very clear (for Parks not to have contact with my son),” said the mother of the confidential informant in a local drug case.
Authorities believe there is a connection between Parks and Luciano Madrid, who was arrested April 21 in Rangely for selling methaphetamine.
“As far as we can tell, yeah, we connect them,” said Sgt. Roy Kinney, Rio Blanco County Sheriff’s Office investigator.
The violation of the restraining order reportedly occurred last Thursday, the day before Parks’ scheduled court date.
“He saw my son at Kum and Go when he was parked in front of the store,” the mom said. “He pulled up beside my son, stared right at him, then got out and went into the store, and came back and stared at him again.
“My son didn’t have a cell phone, so when he came home and told me what happened, I told him to go down and tell the police,” the mom said. “With a restraining order, especially in a small town, if you bump into somebody, that’s not necessarily a violation. But he (Parks) blatantly … after the judge told him he couldn’t be around my son … just stared right at my son, after bumping into him at the store, instead of leaving.”
In a new twist in this case, the mom said her son was served papers July 14.
“(Parks’) girlfriend is trying to get a restraining order on my son,” the mom said. “We had to be in court last Wednesday (in Rangely before Rio Blanco County Judge Laurie Noble).”
The mom said last Thursday’s incident was the first contact between her son and Parks since the restraining order was issued.
“Since the order, he (Parks) hasn’t been in front of our house, and my son’s truck has been left alone, so at least that part is good,” the mom said.
The mom followed up Friday by calling the Rio Blanco County Detention Center to check on Parks’ status.
“I called to ask if he had been arrested, and the jailer said he had been, but he was bonding out and he’ll be out in an hour,” the mom said. “I said, ‘Oh, good.’”
Parks’ case in the retaliation against a witness and menacing charges was continued until Aug. 14.

Dunn~Crawford engagement RANGELY | Barry and Temi Wardell of Rangely announce the engagement of their daughter Darci Dunn, to Justin Crawford, son of Shawn and Thomas Peters of Amarillo, Texas. A September wedding in Amarillo […]

From poultry to photography, swine to sewing, here are the results of the recently completed 2009 Rio Blanco County Fair, which was deserving of a blue ribbon, for sure. Congratulations to all of the participants!

I would like to take this opportunity to say thank you. To Dr. Cameron and her team. Bernie Rice (you know what you mean to me), the ambulance crew, officers, Melody, Frank Huitt (you are […]