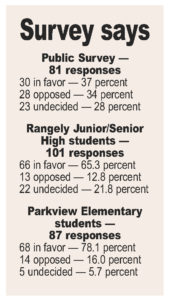 RANGELY I While the Rangely School District continues to study switching to a four-day school week, Rob Winn has already done his homework.
Winn, the principal at Rangely Junior/Senior High, had firsthand experience with a four-day school week while teaching at Hayden.
“They had a modified four day, where every other week students had a four-day week,” said Winn, who taught science and health at Hayden High School for two years before coming to Rangely. This is his first year in the Rangely School District.
“I loved it,” Winn said. “I flat out loved it. I liked the fact it gave us consistent times to meet. It gave us time to work in collaboration with other teachers every other Friday.”
Winn said the extra day without classes gave teachers an opportunity to compare notes.
“We’d sit down, identify needs and modify our curriculum,” said Winn, who was one of four science teachers in grades sixth through 12th at Hayden. “We’d look for ways to improve where we were weak. We’d look at the curriculum of the science department as a whole.”
Winn thinks the four-day school week would have a similar benefit for Rangely teachers.
“For the most part, it’s been positive,” Winn said of the teachers’ response to the possibility of switching to a four-day school week. “One thing we don’t want is our teachers to work more, just smarter. It’s just a simple fact, when you have a smaller staff, teachers are asked to go in a lot more directions. The smaller staff you have, the more staff has to do to get things done. That’s a struggle all smaller schools have. We want to make sure we’re working as smart as we can.”
Winn said the district is going about studying the issue the right way, which has included public forums and surveying teachers, students and parents.
“I think we have been very smart about the way we’ve approached the process and we’ve provided ample opportunity for public input,” Winn said. “The groundwork has been laid, whether we end up going with it or not. I feel we’ve created things that are very student and teacher friendly in the ways we’re looking at it.”
• • • • •
As principal of the combined Rangely Junior/Senior High, which includes grades sixth through 12th in the same building, Winn has already overseen a major change in the school district.
“I think it’s gone well. I couldn’t have expected it to have gone better,” Winn said. “The students have been great with it, and teachers have done well with it. And, actually, parents have been overwhelmingly supportive. One thing that did come up that we didn’t predict was how does one building accommodate all the junior and high school functions. We do a lot of shuffling. It’s just more logistical.
“Another thing we continue to work on is the identity of the middle school,” Winn said. “They’ve been absorbed into a building. We’re looking at things we can do to give the middle school some identity in the building, like an eighth-grade promotion ceremony to mark that event.”

Historical society annual fees are due

Fishing is Fun day was Saturday, June 6. Rangely’s fishing derby at Kenney Reservoir was sponsored by the Rio Blanco Water Conservancy District and the Colorado Division of Wildlife. Meeker’s fishermen were out in force […]

RANGELY I The Panthers’ baseball team saw its stellar season come to a close this past Saturday.