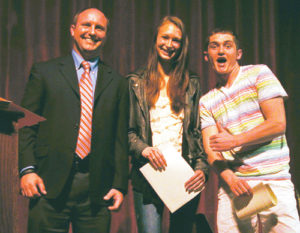 Meeker High School Principal Jeremy Voytko, left, presents the Quigg Newton Award to Amanda Kendall and Lathrop Hughes. The Quigg Newton Award goes to a senior boy and girl based on honesty, respect for others, cooperation with fellow students and adults, good attitude toward work and activity assignments, willingness to accept and carry out responsibilities, efforts to improve self and school, courtesy and exemplifies the qualities listed above. Newton was Denver mayor from 1947 to 1954, was unsuccessful in a Democratic senatorial bid and he retired as University of Colorado president in 1962. He was described as energetic, innovative and progressive in the reforms accomplished as mayor and university president. Among the scholarships and awards presented, Pioneers Medical Center presented three scholarships: to Taylor Bair for $1,000, Brandon and Addy Aven Scholarship to Alex Smith for $500 and Vern Bowman Scholarship to Perye Walter for $500.

MEEKER I “Successful” is how head coach John Strate described the last regular season track meet hosted by Grand Valley last weekend. “We had a great meet for those that are not going to state […]

MEEKER | Picture day will be the first day of school on Aug. 24 at both Meeker High School and Barone Middle School.