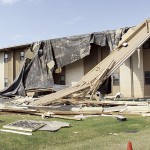 A violent storm ripped through the CNCC Rangely Campus June 28. What many are claiming to be a tornado or microburst blew through the campus taking off the roof of the northwest half of Nichols Residence Hall. Students were not occupying this half but they were the other. Damages also included the roofs of the Yeager and Cramer buildings. No one was hurt on campus throughout this incident. Electricity was lost during the storm and was not back up until late Tuesday night.

Several old trees were uprooted or knocked down across campus, including trees actually falling on the president’s residence. President Russell George was in the house at the time, but was not hurt in the incident. Damage was limited, but a complete review of all the buildings on campus will take place.

RANGELY | Dick and Denise White of Rangely are pleased to announce the marriage of their daughter, Rachel Ranae White, to Skye Anthony Maddux on Oct. 8, 2011, in Kingman, Ariz.