RANGELY | The Panthers made their way to the Eagle Valley Invitational last Saturday at the Gypsum Creek Golf Course. The race was held on a golf course, which means lots of grass and a few hills. This was a bigger meet with 17 teams represented for a total of 231 boys and 195 girl runners. The teams ranged in size from 5A to 1A Western Slope schools.

“It can be discouraging when you are running against so many runners and most from bigger schools but at the same time encouraging when you see how well you placed and when you beat your time from last year. You then realize that you are making progress,” said head coach Beth Scoggins.

The girls did the same as the boys with all new personal best records or a new season best. They were led by sophomore Mary Scoggins, who placed 41st with a season best time of 22:02. Senior Chloe “Shoeless” Filfred ran a new season best of 24:45, one minute and 30 seconds faster than last year and without shoes. Sophomore Ammie Vaughn is getting better at each race and finished with a time of 29:06. Freshman Rylee Allred has a great kick and was able to out-kick several girls at the finish line for a time of 31:51, beating her time by four minutes. Sophomore Brooke Filfred finished with a time of 39:48. Both junior high and high school will not be running this weekend. The teams will be racing Tuesday, Sept. 24 at the SOROCO Invite and then again on Saturday, Sept. 28 at the Moffat High School Invite. 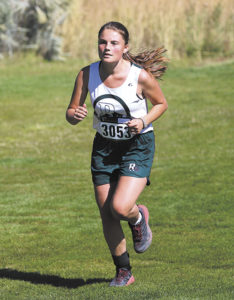