RANGELY I They may not have the numbers, like teams from bigger towns, but Rangely swimmers more than hold their own individually.
Members of the Rangely Hurricanes will compete this week at the Western Slope Championships on Friday through Sunday at Grand Junction. 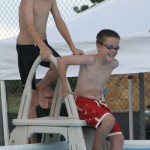 Last year, the Hurricanes won the state seasonal club championship for small teams.
“We had never won that before, but things just worked out right,” said Matt Scoggins, who is in his third year of coaching the swim team. “It was a good year for us.”
There are 26 swimmers on this year’s team, compared to 35 last year.
“We didn’t take any 8-and-under swimmers this year,” Scoggins said. “We don’t score well as a team (because of the number of swimmers). We measure success by if you raced hard. Then you did your best.” 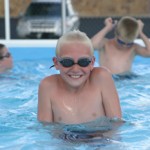 This season, with the Rangely Recreation Center being remodeled, the Hurricanes don’t have use of the pool. So longtime supporter Sam Tolley, whose niece is a member of the swim team, paid for the team to lease a four-lane, 25-meter long outdoor pool for the summer that is located on the tennis courts at Colorado Northwestern Community College. 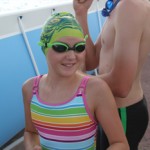 “He donates to everything,” Scoggins said of Tolley. “He’s been very helpful to the swim team over the years. Without Sam we wouldn’t have this pool, or the clinic (put on last year by three-time Olympic gold medal winner Josh Davis). Another year he bought us stopwatches. He’s just a good guy.”
Other groups have helped out the swim team with this summer’s temporary location.
“Our rec center really has been supportive,” Scoggins said. “They helped out with the chemicals (for the outdoor pool). The college gave us this facility to put it on. The CNCC maintenance department plumbed it, and the fire department helped fill it.”
Even without the use of the bigger indoor pool, the Rangely swim team has made the most of the situation.
“It’s been a challenge, because much of the race is won on technique, starts and turns, but we don’t have room to do that,” Scoggins said. “But the kids have worked as hard or harder than ever. It’s been fun, other than the (outdoor pool) being a little cold.”

Special to the Herald Times RANGELY I Residents living in and around Rangely can be screened to reduce their risk of having a stroke or bone fracture. Colorado Northwestern Community College will host Life Line […]