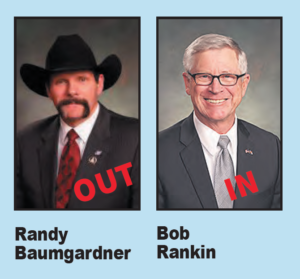 RBC | Ten members of Colorado’s Republican party, representing the counties included in Senate District 8, met last week in Craig to determine a replacement for Sen. Randy Baumgardner, who is retiring Jan. 21 amid allegations of sexual harassment and an expulsion hearing in 2018.
Baumgardner still has two years in his term, and his announced retirement left a vacancy for a fellow Republican to fill.
The vacancy committee, which included Rio Blanco County Republican Party President Logan Hill and Republican party district officer Dave Smith, chose Colorado House District 57 Representative Bob Rankin to fill Baumgardner’s seat. Rankin had already expressed interest in running for the senate seat in 2020. He was elected to a fourth term in the House in November, which will now leave a vacancy in the State House of Representatives.
That position will be filled in much the same way as Baumgardner’s—through a vacancy committee made up of the Republican party county presidents and district officers from the three counties served by House District 57: Garfield, Rio Blanco and Moffat.
The committee is expected to meet in Meeker on Feb. 5 to hear from the candidates vying to fill Rankin’s seat. Rankin’s wife, Joyce, who represents the Third Congressional District on the State Board of Education, and serves as a legislative aide for her husband, has reportedly expressed interest in her husband’s House seat.
The House District 57 vacancy committee will meet at 10 a.m. Tuesday, Feb. 5 at the 4-H Community Building in Meeker (700 Sulphur Creek Rd.). Persons interested in being nominated to fill Rankin’s seat are asked to email their name, address, phone number and email address, a letter of interest and biography, and proof of Republican Party registration within the Colorado 57th House District obtained from the Colorado Secretary of State website at https://www.sos.state.co.us/voter/pages/pub/olvr/findVoterReg.xhtml to Phil Vaughan at 57thhousedistrict@gmail.com prior to end of day on Feb. 3, 2019.