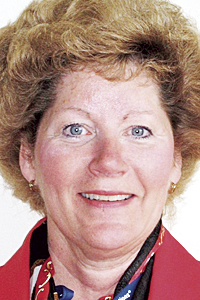 MEEKER I Sheila L. Allen, a retired perioperative nurse now living in the Meeker area, was inducted into the Baton Rouge General Medical Center Hall of Fame on May 12. The award was presented at the 2011 Nurse Excellence ceremony in Baton Rouge, La., where she worked for more than 35 years.
Sheila’s lifelong passion for nursing has resulted in world-wide travels as an author, lecturer, educator and mentor. She has published articles both nationally and internationally and has authored in numerous medical journals and magazines. She has spoken at seminars and meetings locally, regionally, nationally and internationally on perioperative nursing topics, legislative issues, team building, professional commitment and mentoring.
Sheila was the first American to present the Daisy Ayris Lecture in 2003 for the Association for Perioperative Practitioners in the United Kingdom. She served as Secretary for the International Federation of Perioperative Nurses (2001-2007) and as national President of AORN (Association of periOperative Nurses) in 2001-2002. She has been a member of AORN, whose national headquarters is in Denver, Colo., since 1969.
Since 2006, Sheila has served as a clinical educator for SurgiCount Medical, a high-tech sponge counting firm based in California.
Sheila and her husband of 41 years moved full-time to Colorado in 2003 to caretake and manage the North Fork Ranch on County Rd. 8. Shortly after arriving, The Memorial Hospital in Craig offered her a position to help mentor their new student nursing program. Eager to share her knowledge and experience with the next generation of nurses, she was able to arrange a schedule with the ranch that allowed her the time to take on this additional responsibility.
After falling in love with northwest Colorado and its people, they retired from the ranch and built a cabin just outside of Meeker. They now divide their time between Colorado and Louisiana, where they have an OR travel-nurse daughter who has had assignments in Craig, Denver and Vail; and a son and daughter-in-law (also an OR nurse) and two grandchildren, ages one and three.

Letter: Brother is being treated unfairly

Until now I’ve been trying to stay out of my brother’s problems and to remain neutral concerning the publicity John and his family have been getting from you, and from the local rumor mill.